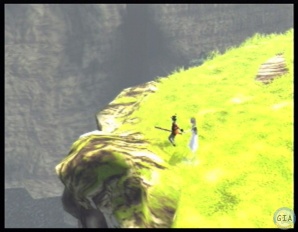 Hey, guess what? Games can be art. Really. Our humble editor pointed this out a while back. Awful nice of him. We could have moved on.

But we didn't. Maybe people just can't listen to common sense. Or maybe it's just that an infinitesimal portion of the world's population reads this site. Whatever. Point is: people are still arguing about whether or not games can be art. Of course, it's not as if there was harmonious consensus on the definition of art before video games entered the fray. People who haven't been to a gallery or museum in decades will tell you exactly what qualifies as art, you pinko hippie, and that is not art. Many feel the need to defend the gates, so to speak, to repel usurpers and pretenders from entering the fold of real, honest-to-goodness art. The exact same debate takes place to determine what constitutes a sport, though I'm sure the art folks would object to being compared to something so gauche.

Video games, incidentally, are in the running for being recognized as both, which probably places it in unique standing.

So what takes place during these arguments, aside from a whole lot of name-calling? Almost invariably Ico is brought up -- so often, in fact, that most people are probably sick of it being the designated flogged horse of the debate. BioShock has a good chance of supplanting it in that regard, but Ico will remain a sentimental favorite. Fans love to wax poetic about it, and about how you're a heartless bastard if you didn't enjoy it. So it's a popular reference point in this debate, we know that. The question is: "Why?"

Well, it's a good game, for starters. When you're presenting your humble offering to the Grand Imperial Council of Whoever Makes These Kinds of Decisions, it's best to have your best foot forward. Electroplankton may be easier to quantify as art, but it's a lot harder to come to a consensus as to whether it's a good game. We've developed certain criteria over the years that determine what makes a competent piece of electronic entertainment, and Electroplankton's hard to squash into this rubric. Ico fits just fine. Controls are intuitive, graphics impress, gameplay builds increasingly engaging challenges around a simple skill set, the hand-holding feature adds that novel touch for which the forum kids clamor. Tastes vary, but we can get a fair number of people to agree Ico is a capable piece of media. Unfortunately, this only helps us avoid peripheral arguments about being a good game versus being art. 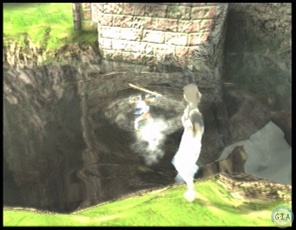 Ico's favored status comes from being just similar enough to all those other media forms that are considered art while still being very much a video game. It's not considered a video game simply by merit of being a piece of software for the PlayStation 2 that meets all the formal criteria for a video game. Ico is unabashedly indebted to the gaming tradition, to genre and form and the conventions of gaming, yet it's visually distinct and proficient. It's a game gamers would feel entirely comfortable playing, yet also one they would feel entirely comfortable showing someone outside their subculture. The opposite of Rumble Roses, in other words.

Mechanically, Ico is like countless other games. It's easily categorized as action-adventure, a familiar genre to whose conventions it adheres closely. You pull levers, you push crates, you light torches, you fight with swords, you aid a princess, you solve puzzles with the aid of bombs that are helpfully strewn about, you find switches in the floor that open doors when depressed. I mean, that last one doesn't even exist outside video games.

That's not to say Ico is uninspired. On the contrary, it features outstanding puzzle design that makes full use of the tools at your disposal -- it even requires you to stretch beyond your comfort zone a bit when it comes to what you can do within the confines of an action-adventure. Most games are far more derivative, it's just that Ico doesn't subvert any conventions. It doesn't need to. It doesn't want to. If it did, it wouldn't be able to accomplish what makes it such an appealing example for the games as art crowd: the fact that it doesn't look or sound like a game.

It's not like Ico's so technically impressive that you forget you're watching something produced by a PlayStation instead of in Pixar's labs. But Ico is missing all those signifiers that tell you you're looking at a game. There's no life bar, no point total, no lives indicator, no button layout, none of those abstract icons we take for granted. The sound design omits battle themes and puzzle-solving jingles. All the visual and auditory indicators that come to mind when one thinks of games are missing.

Even the pause menu reflects this design decision. Most games feature something in line with the game's setting, which sounds reasonable until you realize just how abstract they really are. A steampunk contraption popping into the frame to ask you what items you'd like to equip? Seems perfectly natural! Compare that to Ico's pause and save screens: they're just static and words. It's presented as an intrusion on the experience of the game -- a grudging concession to the demands of the medium. 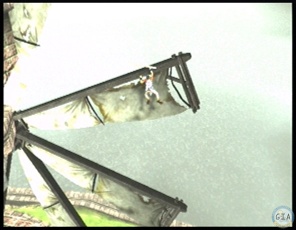 Viewers are then presented something devoid of the tokens to indicate it's a game -- which would allow them to gloss over it -- and are left to focus on what is on the screen, and what is on the screen in stunning. Overpowering light washes out landscapes and dwarfs characters. Cinematic camera angles show off the beautiful terrain. Yorda is truly ephemeral, seemingly melting into the environment at times. The castle from which Ico seeks to escape is a character in its own right, with subtle changes in architecture and materials used hinting at its prolonged construction. Ambient sound overwhelms players, saving music for when it has the most emotional impact. It's aesthetically accomplished and engaging and quite unlike what most people would expect from a video game. At least, it was at the time, anyway; many a game has culled the lighting tricks for their own use.

And that's where the mechanics come back in: Ico couldn't pull this off if it weren't built on an entirely familiar foundation. It couldn't invisibly utilize context-sensitive buttons if it weren't for The Legend of Zelda: Ocarina of Time and the three ensuing years of games training players exactly how to use them and when to expect them. Nothing in the gameplay could possibly catch any reasonably game-literate player off guard. On-screen cues are entirely absent even for the hand-holding mechanic, the one unfamiliar gameplay element. Rather than flashing "Press R1 to save Yorda!" on the screen as she's being dragged into a shadow pit, the game expects you to search the controller in desperation for a way to help her. Ico's spiritual successor Shadow of the Colossus? introduced the uncommon element of the grip meter, which it had to present on-screen rather than risk confusing players who couldn't figure out why their character kept letting go of the giants' pelts. Ico's gameplay is stripped down and simplified to the point where there's no chance of it overpowering or even distracting from the presentation. Fortunately, it's good gameplay and it's good presentation, so everybody can be happy in the end. Those who push games as art have something to show that they won't feel embarrassed about, and everybody else gets a good game. 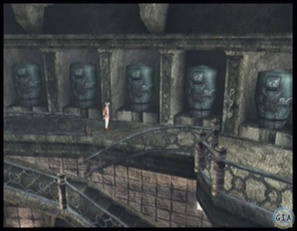 Of course, we've entirely avoided the question about whether or not Ico is art after all, which is really beyond the purview of this article. Those kind of things always turn into amateurish "My First Art Critique!" ordeals. I'm not going to tackle that question. No really, I shouldn't.

I mean, it's not like I couldn't make a case either way. Actually, when you compare it to early attempts by filmmakers when they were

*tranquilizer dart in the neck*

Images courtesy of The GIA, mirrored forever in our hearts