When the Game Boy was released, third parties and Nintendo's internal developers alike leaped at the opportunity to translate their established console properties to the small screen, resulting in portable versions of such favorites as Bionic Commando, Metroid, and Contra. In some cases, these titles proved symbolic in naturetoken gestures to see what this whole "handheld" thing was about before retreating complacently to home systems. But Konami must have thought they'd found a good fit with Nemesis, because they promptly contracted the Vic Viper for one more flight in Gradius: The Interstellar Assault. (Here's a naming anomaly: Gradius was renamed Nemesis in some early localizations of the series, before the title was appropriated for this Game Boy sub-series. The Interstellar Assault is actually called Nemesis II in Japan, making this a case where a localized moniker was excluded from the territory in which it had originated.)

The defining trait of the first Nemesis was its acutely breezy attitude towards difficulty, and the sequel upholds this to an extent. The Force Field power-up still acts as a universal three-hit barrier for the Vic Viper's body, and many flat floors and ceilings can be hugged without penalty. But while the Vic Viper's hitbox is still small enough to find safe spots amidst the most hectic boss patterns, it has grown, and acquiring a sense for its new limits makes for a rocky transition from Nemesis. Continues are not only included but infinite. However, using one means returning to the beginning of a stage, and the number of lives alotted to each retry is fixed. The stage select is gone, but in its place is Practice Mode, where you can play all but the final stage in isolation. The game isn't dismissive of its predecessor's clemencyindeed, this is still one of the easiest Gradius games everbut wherever Nemesis gave a mile, The Interstellar Assault is significantly more restrained in its kindness. 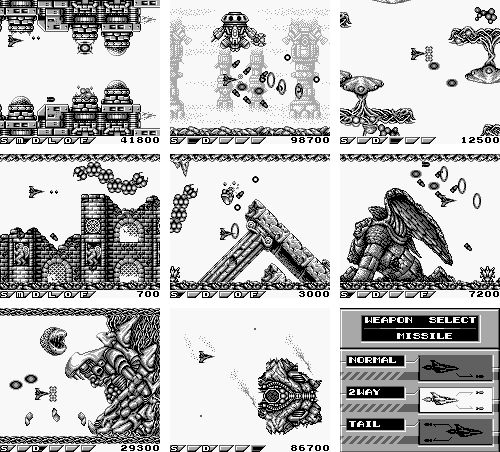 The game is still composed of just five stages, but they're markedly longer and more varied than before. The first stage could easily have been split into two, and its latter half features vertical scrolling between a hierarchy of paths, a trademark that had been noticeably missing in Nemesis. Granted, sprite flicker is much more common now, but the game is able to increase the onscreen activity to something more reminiscent of the series' arcade entries without completely breaking itself. Bullets are more numerous, some enemies are comprised of multiple jointed sprites, and the bosses are just as large and intimidating as in Nemesis, though animated. There's even a Weapon Select option before taking off; where Nemesis offered only the most basic amenities, the Missiles, Double, and Laser can all be chosen to fire backwards, in pairs, or in two directions vertically. Even the unmistakable concentric rings of the Ripple Laser are available for your shooting pleasure. In adapting this type of system, which debuted in Gradius II and was refined to its present form in Gradius III, The Interstellar Assault transcended cribbing feebly from the original Gradius?, raising itself to what was then the vanguard of the series' evolution.

Really, that would have been more than enough to ask of a Game Boy title, but the development staff apparently felt they had still more to prove; not content just to adhere to the latest trends, The Interstellar Assault actually endeavors to exceed them. This is evident right at the game's start, which transpires not in open space as you shoot down predictable lines of enemies but rather in a cutscene depicting the Vic Viper acting as an escort to two enormous starships. An unseen foe promptly shoots both of them through, and here the player takes control, weaving through an asteroid field with a super-sized Big Core in pursuit. Eventually, you can escape the fervor into the narrow entrance of a planetoid, where the first stage takes form: a haunting showcase of some alien race's equivalent of Roman and Egyptian sculpture. (No, you do not encounter a pyramid or a giant sarcophagus head, so stop your Life Force? comparisons right now.) However, once you've navigated out of the tunnels, the Vic Viper is immediately seized by the Big Core, which had been lying in wait; the second stage then takes place inside it, where you must rebuild your power-ups and destroy the behemoth from the inside out.

Instead of a series of disconnected themed worlds linked by warm-up sections and fading in and out of the blackness as needed, every stage in the game is part of a single flowing narrative. Cut scenes are just long enough to set up the next stage, and most aren't even removed from the normal perspective of gameplay. The boss of the third stage, for example, disintegrates piece by piece in atmospheric reentry, and you follow its last mote through the clouds and down to the surface of the planet, which is then the fourth stage. Completely seamless. Even the final boss balks at Gradius tradition. Rather than being some defenseless coil of brains and tendons, it's a well-armed wall of defenses that puts up a fight even upon its destruction in the form of a small pod that breaks away in self-preservation. The second phase then plays out in a reversal of the opening sequence, where the Vic chases its target through a graveyard of burnt-out ships of the same make it was escorting, culminating in one last showdown. 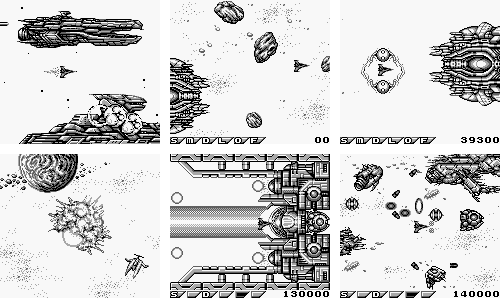 In this way, the game sets itself apart from nearly every entry in the franchise before or since: an unprovoked but somehow masterful execution of organic narrative. It's made from the same stuff as Super Metroid, and it's one advancement the series has often overlooked in gazing back so lovingly at its own archetype. If nothing else, The Interstellar Assault shares a place with Castlevania II: Belmont's Revenge, in that it validates the courage in design choices made well outside the norm of its brand. But even more than that, it's a game that deserved not to be a defense, but a treatise to be patterned and emulated as its brand progressed. Maybe there's just no equity for portable games, but at least we can return to it now and relish it, and imagine what skies we might have seen hence in a universe apart.