Super Mario Bros. 3 is often regarded as the pinnacle of the series. Me, I don't really agree. It was a brilliant game, no question, but I was always a little let down by how closely it hewed to the original. After the wonderful weirdness of SMB2, it seemed a little predictable. Kinda like New Super Mario Bros., come to think of it.

The difference, of course, is that over time I've come to respect the subtle improvements SMB3 added to the mix and appreciate its abundance of "WOW" moments, whereas I rather think NSMB won't grow on me any more than it already has. In other words, New Super Mario Bros. was more fun back in 1991, when it was called Super Mario Bros. 3. 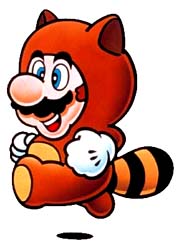 The Princess could float in SMB2, but flying was something that totally changed the dynamic of Mario 3. In fact, the Tanuki Suit (OK, OK, the Raccoon Suit was way more common... but less awesome) was such an integral part of the game that a large chunk of the status/score display was given over the P Meter, which existed simply to inform players that they were running fast enough to do an Orville & Wilbur.

Taking flight was an exhilarating rush, and it was clever move on Professor Miyamoto's part to include flight in the very first level to let gamers know what they were in for. Once you hit the sky, you realized there was an entire annex to the level up there waiting to be explored. Granted, there were hidden cloud platforms in SMB1, but they were basically limited to running in a straight line and collecting coins. In SMB3, they were an entirely new space in which to play. 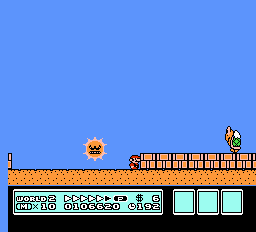 After playing enough Mario, you sort of take it for granted that everything in the background is unsettlingly cheerful. Why do the hills have eyes? Why are the clouds smiling? (The obvious answer would involve those mushrooms Mario keeps ingesting, but never mind that.)

That in itself made the Angry Sun remarkable -- suddenly, here was a background element of the Mushroom Kingdom that wasn't eerily perky. But the real "holy crap" moment came halfway through the level when the sun swooped down from the sky to attack players. It was even freakier when it happened in World 8, which was shrouded in bleak darkness despite the presence of a burning solar object that wished bodily harm upon Mario and wasn't content to let mere UV radiation do the dirty work.

Playing with size and scale is more or less a cliche now; the nature of polygons makes it ridiculously simple to stretch something small to brobdingnagian proportions (see: NSMB's Mega Mushroom). Back in the day, though, the last thing you expected to come across was a Koopa Troopa twice Mario's size. It wasn't some lame Harmony of Dissonance "Basic enemies + Size = Boss" schtick, either; the super-sized foes were simply... basic bad guys, who were a lot more intimidating. There were harder worlds in SMB3, but none more intimidating than Giant World.

5-3: These shoes are made for destroying all who stand before me

The nigh-invincible Kuribo's Shoe is still the single best argument not to abuse the Warp Whistles. Sure, you can skip ahead and beat Bowser in a hurry, but then you'd miss out on 5-3, an otherwise unremarkable world featuring the single best power-up ever invented.

Which is why SMB3, yes, rocks.