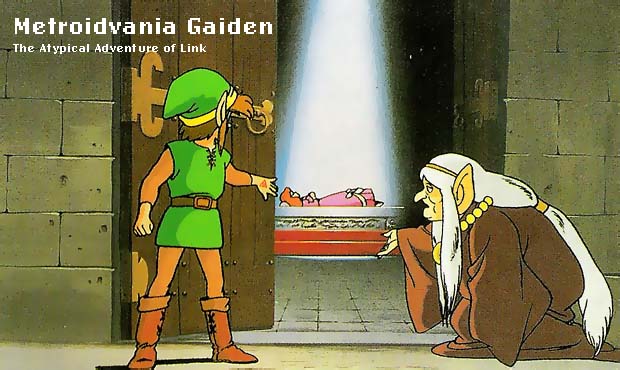 Zelda fans can be a little... uh... intense, shall we say. Not "intense" like the "concentrated orange juice" sense of the word, though. No, I mean intense in the "creepy Deliverance dude" kind of way. They're not as eerie as some of the more hysterical Ghosts 'N Goblins fanatics, but their brains clearly run on fairly simple logic. Basic logic, one might say:

"You hate good videogames." (Also, you're probably a homophobe who fears The Gay.)

Don't think Ocarina of Time is the finest game ever made?

"You don't deserve to play videogames."

The hivemind buzzes its angry chorus, kind of missing the series' entire point of love and peace and using your brain and having a damn good time doing it. I have to admit I'm dreading the task of writing a Twilight Princess review, because the chorus of ill-mannered frothing if I don't love the game like my own child will be unbearably annoying.

Yet even the Zelda hivemind balks when it comes to the weirdest game in the series: Zelda II - The Adventure of Link.

Zelda II... wasn't. It did have the huge overworld, yes, but that wasn't where you actually played the game. It was simply a means to an end. No, the meat of the game was a... a sidescrolling platformer. With jumping. And sword-hacking. And bottomless pits.

Oh, so many bottomless pits.

In point of fact, it wouldn't be too far off to say that Zelda II was an attempt to marry Zelda's quest format to Super Mario Bros.' gameplay -- Link handled a bit more realistically than Mario (a relative term, of course, since the sword downthrust let you bounce merrily along on a bad guy's head) and combat was entirely swords-and-sorcery, but the comparison was undeniable.

A lot of Zelda fans therefore hate Zelda II for being so "un-Zelda-like." Which of course is missing a very important point...

...namely, that Zelda II was basically just doing what Ocarina of Time did, 10 years earlier. The confusion comes in the fact that in the 3D era you can swing the camera around a little to make things a little more homogenous. Do it right and you can cause games in both a traditionally side-scrolling platform series and a traditionally top-down adventure series to share almost exactly the same perspective and still feel entirely faithful to their roots. Ocarina and Mario 64 are pretty much the same basic game with different emphases: one with lock-on swordplay and the other with lots of jumping.

And Zelda II did it first -- in fact, Ocarina is arguably truer to the second game in the series than the third, especially when it comes to fighting. Ocarina's emphasis on Z-targeted duels recalled all those vicious Darknut battles, for instance, and the role of NPCs was much greater than in the first and third games.

But the limitations of technology made the action-y change feel a little too drastic back in 1988. And really, Zelda II was a radically different game than its classic predecessor. The inclusion of both experience points and -- even more uncharacteristically -- lives created an uneasy balance between RPG and action that never felt completely resolved.

Fortunately, the character leveling system we got in the U.S. version was better than the Japanese take (where upon resuming a saved game you'd find that Link's strength/magic/life levels had been downgraded to be even with whichever stat was lowest). But it was still annoying, especially when you were just a few points from another level-up only to be knocked into an inconveniently-placed bottomless pit, prompting the dreaded Return of Ganon. (MWAH HAH HAH HAH)

Perhaps the most irritating element of Zelda II was how completely unforgiving it was when you died. Yes, it was nice to have more than one life, but once you saw the Game Over screen it was back to the starting point with you. Not the starting place as in "the beginning of the current area or palace" but rather as in "way back at the beginning of the game." The final dungeon was a little more forgiving, although beating the game is still an exercise in sheer willfulness; you have to slog through a horrible overworld gauntlet full of random encounters and set ambushes (full of bottomless pits, it should be noted) just to get there, at which point you're beset by the biggest, most convoluted and most monster-filled palace in the game. And that's before you get to the brutal two-part final boss.

It's probably for the best that I played this game back before I realized that retardedly difficult games that cheat for their challenge level are for, well, retards who don't know the difference between good and bad game design. Ah, days of naïve youth.

Even with all its shortcomings -- and there are plenty, believe it -- Zelda II really isn't as bad as some people would have you believe. True, it veers wildly from the template of its predecessor, but it still tries hard to uphold its spirit. Many of the classic monsters return, from Octoroks to Moblins to Darknuts, the iconography still includes Triforces and keys and faeries, and... what else was there? Oh right, you're still battling your way into dangerous dungeons to take down a boss and earn a little nugget of wonder that brings you a tiny bit closer to that elusive Triforce.

The original game's mix of overworld and dungeon is still very much the heart of Zelda II. Even if the overworld has been spread apart to create something akin to an actual country with towns rather than isolated hermits. Although there are a few of those too:

It's this mashed-up structure that makes Zelda II almost, but not quite, a part of the Metroidvania canon. Unlike Simon's Quest, the big-ass world doesn't have to be navigated entirely in the linear, side-scroller perspective; platforming is how you earn experience and treasure, not how you get about the countryside. It's a fine distinction, but a distinction nonetheless.

Zelda II gets a lot more crap from gamers than it really deserves. It's a big if not always perfectly-crafted adventure, and in a lot of ways it set the standard for Ocarina of Time, the game that makes the hardest of hardcore Zelda fanatics all wobbly in the knees. It's a victim of its own hype -- Nintendo trumpeted the brilliance of and delayed the hell out of this game with enough fervor to make Twilight Princess look like a sleeper -- and a victim of its own legacy. When you're surrounded by total excellence on all sides, you can't afford a single flaw... especially if you deviate from what's expected. This was Link's big deviation, and he stumbled a bit along the way. And the merciless fan-wolves pounced.

Controversial or not, it certainly didn't keep half of Nintendo's third parties from ripping this game the hell off back in the day (see also Moon Crystal, The Battle of Olympus, Faxanadu, Rambo, etc.). And we all know imitation is the most sincere form of flattery. So either Zelda II deserves a few props, or those other games are really, really embarrassing suck-ups. Me, I'm going with the former.

P.S. It's "Adventure of Link," not "Adventures of Link." Singular adventure. Just one.