Genre is very important in video games. Games involve interaction, and players cant be expected to relearn how to control their characters and make progress with every single new title. Its easier to stick closely to genre conventions than to build something from scratch, and easier for the player as well. When developers wander beyond the bounds of genre, they often resort to oblique and overly abstract methods for controlling the action, as in Indigo Prophecys quick-time event sequences and analog stick-based input.

Genre is useful, perhaps even necessary, but it does have its drawbacks. Obviously, it makes for plenty of games that slavishly cling to genre conventions, content to color in the numbers and confident that fans of the genre will play whatever is placed in front of them. And, in fact, many gamers are perfectly happy to limit themselves to playing a handful of genres without broadening their tastes. Ultimately, this specialization via genre has lead to a splintered community of creators; only a handful of large developers dare to create games of disparate genres these days, and even then, those companies are usually split up into separate teams that specialize in a single field.

Gaming can therefore be an incredibly insular experience. RPGs are made by RPG developers to RPG standards for RPG fans. Likewise for first-person shooters, sports games, racing games, and so on. In the end, most games are created with the intent of creating a good example of their respective genres rather than simply creating good games.

Problem is, Mirrors Edge shouldnt be a first-person game. 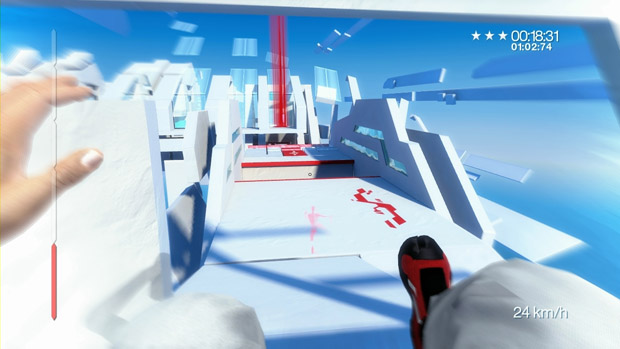 But being a first person game was part of the appeal of Mirrors Edge, wasnt it? Detractors of of the genre love to make light of the perceived stylistic homogeneity of FPSs. Thick-necked Space Marines in gun-metal grey, as the not-unjustified stereotype goes. In this light, Mirrors Edge seems like a breath of fresh air with its unique aesthetics, its lithe female protagonist, its emphasis on platforming and hand-to-hand combat over gunplay, and its unique setting.

To its credit, the game does introduce a few worthwhile concepts to the genre. Acquiring guns that hold a strictly finite amount of ammo (which is not displayed on screen) is a welcome subversion to the accepted trope of ammo leaping off the corpses of enemies into the waiting pockets of double-wielding heroes. Its a disarming mechanic that forces you to rethink how you use weapons and adds a certain sheen of verisimilitude. Other shooting games could benefit from similar systems.

But for the most part, the game is rife with examples of why it should have used the third-person perspective. It starts with little things, like the games cinematics. Most first-person games stick to a third-person camera for cutscenes, and those that dont (like '''Half-Life) keep the player in control during such sequences, fostering a greater sense of immersion. Mirrors Edge keeps the camera in first person, but removes control. It doesnt help you empathize with main character Faith, and it forces you to stare directly into the dead eyes of the games other characters. You could claim the first-person cutscenes are meant to promote a stylistic consistency with the gameplay... except that the game also includes cut scenes that are not only third-person, but which are rendered in a completely different two-dimensional style. Its an inexplicable decision that might have made some sense if the 2D segments were restricted to flashbacks, but as it is merely shows how uncomfortable the game is in its own first-person skin.

Of course platforming has always been the domain of third-person games, though there have been a handful of first-person games that have done jumping well. For the first half of the Mirrors Edge, DICE plays their hand well, keeping the games first person point-of-view in mind. The action is always placed ahead of Faith so obstacles can be anticipated and planned for. Runners Vision, the mechanic that highlights pertinent environmental objects in red, helps keep players on track as well. But later on in the game, when the environments grow more and more confined, the handicapping nature of the perspective begins to assert itself. 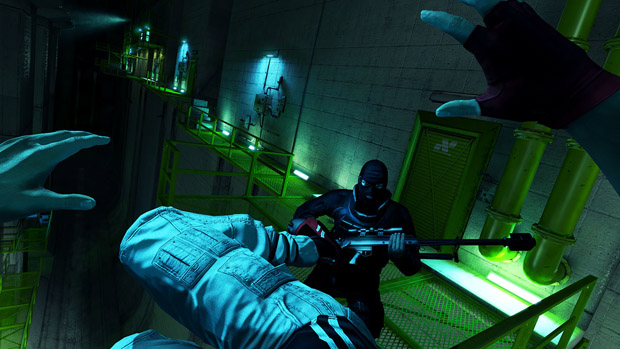 In the final level level, Faith has to ascend a narrow shaft, leaping from side to side in search of handholds. Since her head is naturally facing the wall after each jump, the player needs to turn her head to look behind her after every jump to find the next ridge to grab on to. This wouldnt be so bad if the game treated Faiths neck like a well oiled tripod, like certain shooters do. Instead, in keeping with the games particular brand of realism, players crane her head ever so slowly... to the left... where she almost... but not quite... looks directly behind her. If nothing is there then the player has to look ever so slowly... to the right... where she almost... but not quite... looks directly behind her. Should nothing be there, the player needs to shimmy a bit to the side and repeat the process.

Sections with narrow ledges involve far too much looking at the ground. Climbing sequences force you to spend too much time with your nose inches away from a cement wall. Complicated jumping sections afford you too little information from your limited vantage point. Set pieces where the music swells dramatically and Faith careens towards an impossible leap too often end with the player slipping off the edge of a beam.

Sometimes its like the game isnt even aware of its first-person nature. When Faith stumbles upon the governments runner assassination program, shes forced to run away from a gaggle of runner/ninja/baseball umpires. But running away from something that isnt firing a gun at you in first-person is really, really boring. After four minutes of running and staring straight ahead, I wasnt even sure if they were following me anymore. I turned around using the 180° spin button, and sure enough they were still hot in pursuit. But the game doesnt allow you to press the quick-turn button twice in a row so I actually had to take a few steps towards my assailants before I was allowed to spin back around. 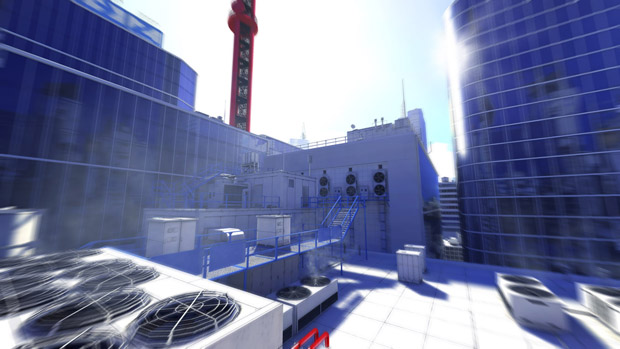 And this all happens before the combat system is even mentioned. A good first-person hand-to-hand combat system shouldnt be impossible, and Mirrors Edge is a nice attempt, but it just doesnt work here. The bullet-time mode is nearly useless. A system which intends to reward ingenuity instead punishes it. But then, Mirrors Edge constantly undermines its own unique features. It clearly creates pathways for the player to follow, disarming guards one by one, but such methods nearly always end up with Faith dead. The best bet is to disarm some guard on the periphery of the action and pick off guards one by one in a pokey game of pop-out-from-cover-and-shoot. For a game that boasts so many challenges to the FPS formula, it undermines itself constantly by unwillingly coaxing players to abandon these novel mechanics in favor of tried-and-true tactics.

One sequence in particular perfectly encapsulates the games confusion, both in its choice of perspective and mechanics. In one cut scene, Faith spies on a barrel-chested Kingpin lookalike who suddenly bursts through a door to attack her. A QTE prompt flashes on screen which results in player death if not acted on in time. This is the only time a QTE is used in the entire game. This is the only time the game throws controls back in the players hands during a cut scene. Instead of being a natural part of the games immersive first-person presentation, its a one-time gimmick that will kill all but the most fast-reflexed gamers, and will force all the rest to replay from the last checkpoint, only this time with none of the suspense.

This isnt to suggest that first-person shooters shouldnt expand beyond well worn tropes and conventions. Mirrors Edge is a sincere effort to break away from the FPS comfort zone, and commendably so... but it is so consumed with subverting expectations of the genre that it incorporates level design and mechanics that often fail to fit its perspective. Yet its best moments are memorable, and despite its failures, I sincerely hope any follow-up holds on to what made Mirrors Edge a unique FPS... and jettisons what made it a bad FPS.