In certain (and completely unbiased!) circles, Monkey Island 2: LeChuck's Revenge is considered the apex of PC point-and-click adventure gaming -- though that's not to say it was all downhill from there. Still, 1991 was perhaps the last year that LucasArts' favored genre could hold its own without needing to add bells and whistles to fuel the fire of the nascent buzzword that was "multimedia." Had the technology been available at the time, though, LucasArts surely would have made use of it; after all, Monkey Island 2 is an example of hardware limitations being pushed to their absolute limit. But it wasn't, and Monkey Island has an inherent quaintness that really makes it feel like the purest PC adventure experience out there, and one thats truly emblematic of a very specific period in gaming. 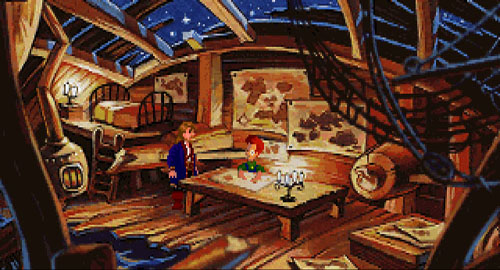 Coming smack-dab in the middle of LucasArts adventure catalog, Monkey Island 2 can be considered a passing of the torch from one generation to the next, where the genre would subsequently bite the dust. It would also be the last LucasArts adventure to ship exclusively on floppy disk, meaning that it was also the company's last adventure without voice acting -- though at eleven diskettes, its clear that the company was just itching for CD-ROM technology. With game designer Ron Gilbert leaving LucasArts after Monkey Island 2 to focus on making edutainment (a decision that would later mocked be in Sam and Max Hit the Road?), there was no mistaking that this was the end of an era; an era that was barely five years old, admittedly, but an era nonetheless. His fame may be outweighed by that of industry heavies like Hideo Kojima, but Gilberts name graced the front of game boxes long before auteur theory had descended upon gaming.

If Gilbert had created the point-and-click adventure genre with Maniac Mansion, and evolved the template with the first Monkey Island, then Monkey Island 2 represents the perfection of that template. Its by no means as revolutionary as Gilberts other games, but with all the creative tools tested and proven, the creators were able to exploit their bag of tricks to their fullest. Here we see in play everything LucasArts had built until that point: The point-and-click verb system, the dialogue trees, the scaling character sprites, the hand-painted background art, and the revolutionary iMuse music system by composers Michael Land and Peter McConnell. Each of these elements appear here in a refined form, though describing the individual refinements would amount to little more than slapping the word better behind most of them; Monkey Island 2 is the perfect sequel in that its a tastier second helping of what made the original so great. However, one specific refinement -- namely, the evolution of iMuse -- deserves special attention for placing so much importance on the soundtrack in a way thats rarely been done since. 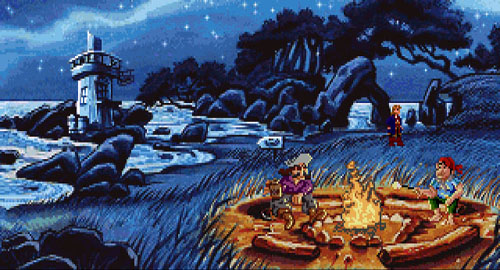 As good as its music was, the original Monkey Island didnt have very much of it; outside of cutscenes, its a fairly silent game. In the early '90s, the PC sound card was both a novelty and luxury, so you have to give LucasArts credit for placing any importance to something that was considered unessential. But iMuse, which was so revolutionary in the original Monkey Island, is used to its fullest potential in Monkey Island 2; it was the first LucasArts game to feature music everywhere. And its more than just catchy filler; like any good soundtrack, the work of Michael Land, Peter McConnell and Clint Bajakian helps give character to the locations and people upon which the plucky Guybrush Threepwood in the course of his journey. Such a high degree of attention to aural detail was practically unheard of back when most people were content to hear the dreaded, intermittent screeching of their PC's hated internal speaker.

The iMuse system, created to synchronize music to actions and smoothly switch from one piece to another, would be used to provide the rich and vibrant soundtracks considered a standard for LucasArts adventure games. And while later, cartoonier adventures like Day of the Tentacle and Sam and Max Hit the Road would take better advantage of iMuses synchronization features, Monkey Island 2 uses iMuse's seamless track-switching ability far better than any LucasArts adventure that would follow -- a feat which isn't nearly as boring as it sounds.

From its very beginning, Monkey Island 2 isnt shy about its musical prowess; as Guybrush wanders through different areas of the dock-built village of Woodtick, the background music -- catchy enough as it is -- wanders in and out of different variations on its theme. And its not as simple as Super Mario World?, where Mario + Yoshi = bongos; as Guybrush leaves locations, the variants on these themes dont simply fade into Woodticks main tune; rather each has its own closing flourishes that join nicely into the overlying music of the village. And when Guybrush wakes up a group of sleeping pirates, a jaunty accordion enters the mix, giving us a variant of a variant on a theme. Needless to say, its hard to think of any games outside the LucasArts oeuvre where the music is just so important and organic in the overall product. 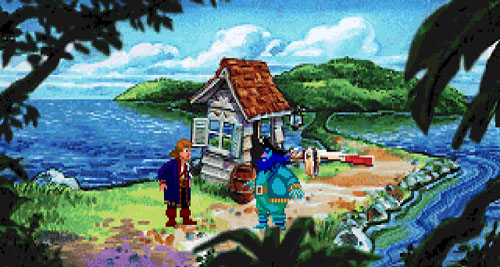 Were Monkey Island 2 simply a collection of technical tricks, it would be interesting but hardly memorable or essential. The reason its heralded as one of the best point-and-click adventures ever made actually has little to do with aesthetics. Rather, its game portions are the real reason its such a celebrated title. While the law of diminishing returns is expected to be in place with most sequels, Monkey Island 2 sidesteps this issue in a way thats unexpected for a follow-up based on the obvious concept of revenge (i.e. Jaws, Jason, Rambo, etc.). Guybrushs quest is just as simple as it was in the first game; in LeChucks Revenge, hes looking for the treasure of Big Whoop, and a way to stop a reincarnation of the ghost pirate LeChuck that he accidentally... uh, carnated.

Really, this is all an excuse to shuffle Guybrush around to different locations full of insane people and devious puzzles that, given their quirky logic, never really feel forced. But make no mistake: This is quite possibly the most difficult chapter of the Monkey Island series, which is one of the reasons youre given a choice of difficulty before starting. LeChucks Revenge is much more merciful on its easiest setting, but wimps beware; playing a handicapped version of the game means youre missing out on quite a bit of content.

While the story may rest on thin, video gamey motivations, Monkey Island 2 does an excellent job of fleshing out returning characters and giving a real sense of history to the flora, fauna, and personae of Guybrush Threepwoods adventure. Yet whats most infamous about Monkey Island 2s plot is its outlandish ending, which seems to dismiss the entire Monkey Island universe as little more than a dream.

To spoil things entirely, after a confrontation with the zombie pirate LeChuck, the games ending reveals that both Monkey Islands were little more than the delusions of a young GuyBrush in the bowels of an amusement park. And while it pays homage to Monkey Islands Disneyland ride-inspired origins, the ending is a pretty sobering shock for the player -- especially for anyone watching it back in 1991 with no Internet to turn to for answers. There is a brief moment of the ending that hints at the bizarre plot twist as a conjuring of LeChuck (which we learn is very true in the following sequel) but fans were left hanging for half a decade and still wonder (or rather, argue) about Ron Gilberts true intentions for Monkey Island 3. 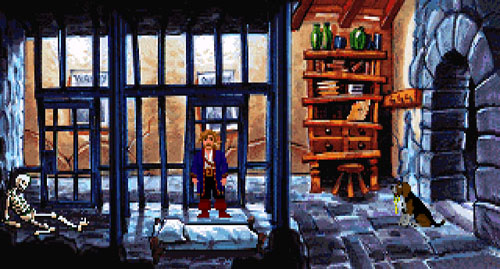 While there are no real clear-cut generations of PC hardware, Monkey Island 2 can best be compared to a late-late-generation NES or SNES game; it's a complete labor of love, created by talented designers making the most out of the hardware available. Admittedly, things didn't change much for LucasArts with their following games, but there was always the technological need to compete despite perpetually working with a formula perfected in the early '90s. Even though the mourning period is over and point-and-click adventure games have returned, albeit in a much humbler form, well probably never see games as ambitious as Monkey Island 2 ever again. But with Ron Gilbert back and working on his long-lost genre, well almost certainly see games that are just as inspired.