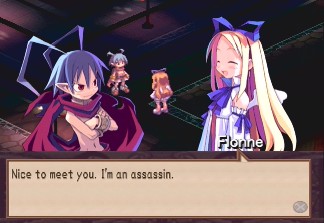 Working Designs learned the hard way: if a company is to subsist entirely on niche games, they have to be good niche games. Okay, so a few other mitigating factors led to the demise of Victor Irelands brainchild -- it certainly didnt help that the releases of their titles were usually tied up (and prices of their titles cranked up) by the production of pack-in puppets and plastic doo-dads. And Irelands self-serving brand Usenet bravado, whose spirit has been seen most recently in the battle of Dennis Dyack v. The Internet, began to alienate many a fan as his crusade to release a cruddy PS2 launch game five years after the fact reached a fevered insanity. In a world with Atlus, a company that releases quality games on time and free of Internet bitchery, its not enough just to try. You have to try harder.

Our story actually begins in 2003 with Atlus as they release a little PS2 strategy RPG called Disgaea: Hour of Darkness. At the time, it was received as a breath of fresh air; the game dumped the stodgy medieval trappings of most Japanese SRPGs for a goofy, Tim Burton-esque world of endearingly creepy ghouls and adorable undead hench-penguins. Derivatives of The Nightmare Before Christmas had invaded Hot Topic and the bodies of its teenaged minions well before Disgaea hit the shelves, but developer Nippon Ichi made what could have been potentially hackneyed somehow tolerable by giving us a main character whose entire world annoyed the hell out of him. The game was a surprising success, and, thanks to Atlus limited printing policy, went on to fetch untold millions on eBay until its inevitable re-printing and remakes on PSP and DS. 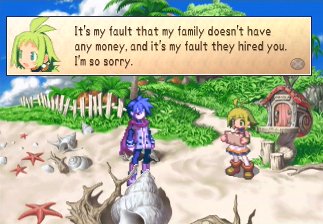 Its safe to say that Disgaea made Nippon Ichi, even though the company had been mildly successful in Japan until that point. But it wasnt until the release of Disgaea that the company realized there was real money to be had in their niche world of number-crunching, stat-exploiting, game-breaking SRPGs. Taking the reins from Atlus (though not completely--Atlus still did the localization), the company opened an American branch and released their next game, Phantom Brave, in the States all on its own. The game was much more mature in tone than Disgaea, following the melancholy story of an ostracized little girl who was surprisingly not hyper-sexualized. (The Sasami defense could be applied to Etna of Disgaea, but that doesnt make Etna ecchi any less disgusting.) Nippon Ichi seemed to be advancing its art form of choice, if only by baby steps. It wouldnt be clear until the companys following games that Nippon Ichi was in the business of churning out the strategy RPG equivalent of Eidos' annual, uninspired Tomb Raider? updates.

While both Disgaea and Phantom Brave were good games, even at the time it was hard to ignore their flaws. Gamers didn't have much trouble becoming wrapped up in hyper stat-building in the games' bottomless optional dungeons, to the point where suffering total burn-out well before finishing the games mandatory story missions was a real danger. Granted, players aimless wandering isnt strictly the games fault, but Nippon Ichi has a habit of making their distractions (i.e., grinding) mandatory for progress. 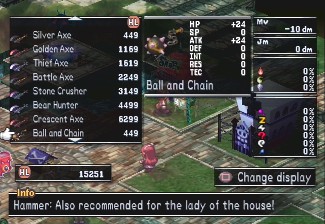 Meanwhile, the graphics of the Nippon Ichi oeuvre -- though chock-full of charming and colorful character designs -- suffer from low-res, choppily-animated sprites placed on low-poly backgrounds straight out of a middle-of-the-road PlayStation game. That's PlayStation one. Stunning visuals arent necessarily a requirement for an SRPG, but after Disgaea's success expecting at least a minor aesthetic improvement in Phantom Brave wasn't unreasonable. But that clearly isnt in the cards for any of Nippon Ichis following games, even with a significant hardware boost; one look at the PS3s Disgaea 3 and its easy to feel wistful for the days of Sonys harsh North American release standards. HDTV owners beware: those jaggy sprites are like shards of broken glass. For your eyes.

The worst part of Nippon Ichis diminishing returns is undoubtedly how they make whats essentially the same game new every year; the increased complexity of their standard SRPG mechanics. By this point, weve all come to expect some new, insane feature and level-ups rolling into the high thousands with each of their new games; but in catering to the hardest of the hardcore, Nippon Ichi has painted itself in a corner where only high-functioning autistics can fully appreciate the increasingly baroque stylings of their work. At best, the company's game design can only really be appreciated conceptually: while it sounds nigh-on hilarious that you can wield a little girl as a weapon in Phantom Brave, the novelty crumbles under the completely unfocused nature of a rambling sandbox SRPG. When the gimmickry wears off, games of the Disgaea mold ultimately feel like little more than the shuffling about of a lot of big numbers, with all the rewards of math class.

(Which is fine if youre into that sort of thing. But most of us aren't.) 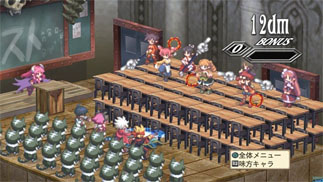 Its clear by the sound of all the angry responses being typed right now (listen closely) that Nippon Ichi has its fans, but its frustrating -- not to mention a bit embarrassing -- to see a company whose work was once such a revelation spinning their wheels with yearly retreads that do nothing but graft baffling mechanics onto a crumbling foundation with disappointing results. In a better world, Disgaea 3 would be a hilarious Kojima/Kaufman-esque meta-joke about how little Nippon Ichis games actually improve over time. But in our current, terrible dimension, the infamous SRPG mill is actually being sincere. Even without cardboard character standees, cloth maps, and decorative analog nubs, Nippon Ichis days seem wholly numbered.