Phoenix Wright: Ace Attorney is a visual novel, a point-and-click story, a text adventure game -- whatever you want to call it. It places you in the smart shoes, sharp suit, and power tie of one Phoenix Wright, a rookie attorney just out of law school and thrust into some of the most intense, amusing, and illogical trials the world has seen since at least O.J. Originally published for the Game Boy Advance in Japan under the name Gyakuten Saiban, it was ported to the Nintendo DS with a handful of new features (including the seemingly Court TV-inspired ability to scream Objection! directly into the microphone) and a completely new chapter that capitalized on the dual-screened handheld's power with 3D evidence, video, and more sophisticated uses of the touch screen and microphone features. 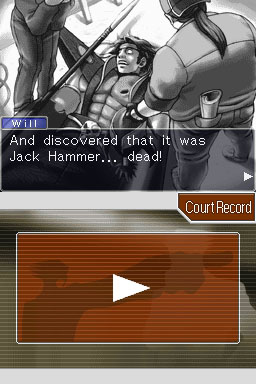 All of which is totally expected. It only became bizzarre when Capcom America decided to localize the game for everyone who isn't Japanese.

It was a bit of a risky undertaking, as at the time the DS was still somewhat unproven and other adventure games -- such as Cing's Trace Memory? -- hadn't fared so well. Which is perhaps why Capcom decided to publish only a limited quantity of copies of Phoenix Wright in the U.S. One thing led to another... Well, specifically, word-of-mouth led to underground success. And soon Phoenix Wright was in a second printing...because you demanded it!

The game's structure is not unlike that of a television anime, which fits the character designs and story nicely. The story is divided into five main chapters, most of which are further broken down into episodes. Each chapter contains a different murder case (yes, they're all murders) where Nick, as Phoenix's closest friends call him, must gather evidence, cross-examine witnesses and finally determine the truth. The first two cases aren't particularly difficult to resolve, since you see the murderers right from the beginning. But the others leave Phoenix (and, by extension, you) completely in the dark.

The gameplay mechanics would fit right at home in Law & Order, if it were a video game with a heavy influence. (Someone should write that down. It'll make us rich. "Lenny-san!") Each case consists of different types of days, alternately dedicated to investigation and to trial. The former see you visiting locations, searching for evidence, contacting witnesses and preparing your case -- fairly standard stuff. The trial days are where the game gets spicy. You must cross-examine witnesses, finding contradictions in their testimonies and revealing relevant items of evidence...which can be pretty tricky, especially in later cases. 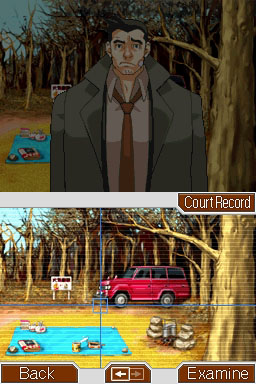 Some people sneer at Phoenix Wright as less a game than an interactive anime. Sure, you could cheat and present each piece of evidence until you select the right one by brute force, but that's no different than writing every possible number in a sudoku grid to success by process of elimination. That's called "missing the point." You have to think, and to determine exactly which piece of evidence contradicts a specific portion of a witness's testimony! This makes for such engrossing gameplay that you'll continue to play even when your DS is turned off. Whether you're at school, at work, or dying on a sinking boat, you'll be recreating the scene of the crime in your mind, over and over again trying to understand what happened, why it happened, and when it happened. It sticks with you.

You'll solve every case immediately...if you're Batman, the world's greatest detective. If, on the other hand, you're a clueless moron like me, then you might want to use the Sherlock Holmes method for investigating crimes: Know the facts from tip to toe and memorize them until you have a headache; then relax, go to the movies, and play another game or something. Eventually, the answer will pop into your mind as your unconscious ties all the loose ends. Magic? No, just Phoenix Wright.

Yet for all the investigative work and screaming your objections, Phoenix Wright is in no way a law simulator. The legal world in Phoenix Wright ranges from from "That's weird" to "This is complete nonsense." Besides, you're more a private detective than an attorney. That's fine -- the game never sets out to be an authentic representation of any real-world legal system. (Or so you'd hope -- any country with a legal system this ridiculous should be avoided at all costs.) 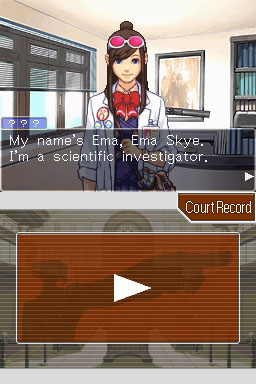 Like any other text adventure game, it's really more about the story than the authenticity: Nick's story, and those of the people close to him. Most of the cases only deal with the main characters indirectly, but you'll learn their backstories and their motives in the process. It's not precisely a transcendental story, perhaps not even worthy of a second thought. It is, however, completely engaging and features plenty of excellent if occasionally weird humor, and the plot twists will keep you guessing.

It's hardly all pros and zero cons, though. Sometimes certain evidence appears to contradict specific dialogue in the testimonies. You may be factually correct in these cases, but Capcom runs a kangaroo court. It's their way or the highway, and no amount of screaming objections into the mike will change the game's final ruling. And the copious spelling and grammatical errors are painful to see in such a text-intensive game. Phoenix Wright also offers roughly zero replay value once you've solved a case, though the jokes are good enough that you'll probably want to revisit the game one of these days.

Phoenix Wright proves two things: That even I can develop decent skills as a detective with enough effort -- I wouldn't have solved Who Killed the Robins Family without them. But more importantly, it demonstrates that even a simple game can be completely entertaining if it's done well.