Nintendo's new focus on casual, pick-up-and-play experiences might seem a sudden shift in focus from the epic adventures of classic series like The Legend of Zelda or Super Mario Bros.. Yet seeds of this new direction are evident in a 2003 Game Boy Advance title called Wario Ware, Inc.: Mega Microgame$!, an early example of how games could be both extremely simple and yet still fun to play.

With WarioWare, Nintendo unleashed a bold new genre upon an unprepared gaming populace: microgaming, a variety of short -- as in five seconds apiece -- but sweet scenarios thrown at the player in an unrelenting, rapid-fire assault. If you'd asked the average gamer (the theoretical average gamer, whom we've never actually met) if he was interested in playing a bunch of games that only lasted a few seconds apiece, he'd probably have given you an incredulous look before turning his baseball cap backwards and walking away slowly, muttering epithets not fit for even a Halo 3? deathmatch under his breath.

But despite our imaginary average gamer's initial resistance, playing is believing. WarioWare went down in history as insanely addictive, combining a charming yet barebones aesthetic with scenarios that went a step or two beyond merely "quirky." Everyone who's played WarioWare remembers being presented with a finger and a nose and having about two seconds to determine that they were supposed to guide the former into the latter. Figuring out the goal and mechanisms of each microgame was every bit as fun as actually performing those tasks. You don't pick up a video game expecting to pick a nose, but the joy of discovery combined with these laugh-out-loud situations elevated WarioWare into the realm of instant classic.

But Nintendo didn't stop there. 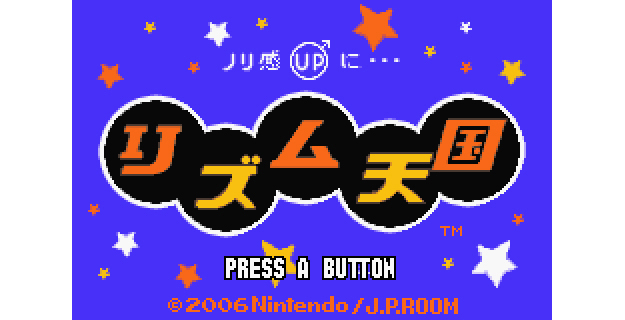 Rhythm Heaven -- known as Rhythm Tengoku in Japan -- is a lesser-known cousin of WarioWare that never made its way to the US retail market. This, despite the fact that Rhythm Heaven retains its predecessor's quirky and charming microgame-driven nature, then adds a brilliantly simple twist: rhythm and timing. Each microgame requires precise timing, and the player's task is to feel the pace of the music, then react as much to the aural stimuli as to the game's visual output.

Developed by the WarioWare team, Rhythm Heaven doesn't simply inherit its gameplay verbatim from WarioWare. Rather, it evolves the microgame concept by retaining the conceptual simplicity of each game while extending its duration. Where each stage in WarioWare is usually a bucket of many random microgames, Rhythm Heaven treats each stage as a smaller, more consistent family of related events. As the player progresses through all the microgames in a family, more difficult families appear. 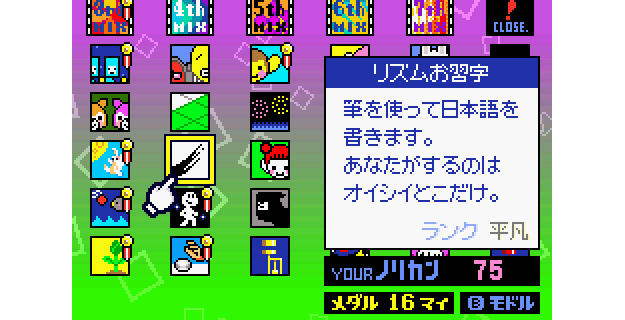 This game has a little of everything!

The focus of the game is entirely on its microgames, which are sorted into eight families of six -- 48 games in all. Initially, only the first game is available. As you complete games and score an "average" rating or better, the next event in the family becomes available to play. The final game in each family is an insane remix of all of its events, combining fantastic full-length songs with abrupt-but-familiar moments of previous microgames. This gives the final challenges a hot-potato sensation as the game mechanics switch rapidly and without warning -- yet everything is unified through the music.

Rhythm Heaven's focus on music is obvious from the title screen. The game contains a lot of music, all of which is wonderful. As the gameplay focuses so intently on rhythm and the player's sense of timing, the music's quality is a critical element of the overall game. Happily, Nintendo R&D1 stepped up to the task and completed it with aplomb; not only does Rhythm Heaven provide an abundance of toe-tapping tunes that will be stuck in your head for weeks, it succeeds as a gaming experience by integrating properties of each song into the corresponding microgame's design.

Each microgame's scenario is designed around an activity or event, but it then adds elements that range from real-world cultural events to completely absurd fantasies. Like WarioWare, not every game in Rhythm Heaven makes logical sense...but every game is damn fun to play. The incredible variety of musical game scenarios keeps the action feeling fresh and interesting while keeping a few tricks and surprises hidden up its sleeve. 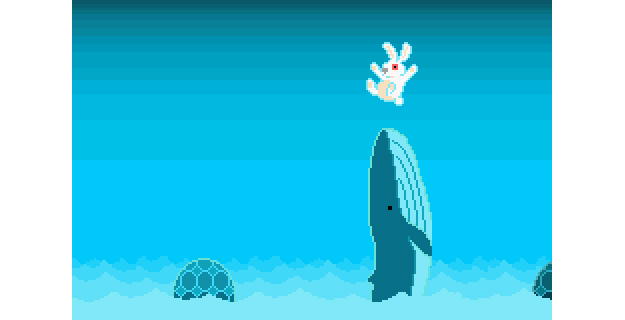 For example, one scenario is centered around swinging a baseball bat to hit a baseball -- simple enough. But that's where sensibility ends. The baseballs aren't pitched but rather pop out of a classic Mario green pipe. The referee is a little floating UFO containing an alien, who sometimes sticks his head out on the beat. Oh, and the batter is inside a room floating in outer space. All of this is at the more conservative end of the spectrum -- and I didn't even mention how the batter's head will turn into a gigantic pink sad face if the player misses too many balls.

The best part about this scenario? You won't care how nonsensical it is when you're playing it. You'll be too absorbed in the background music, the sound of the ball leaping from the pipe, its movement as it falls into place, the perfect timing required to press A and swing to connect, the size of the ball as it zooms toward the camera, and doing it all again. The whole cycle happens so quickly that the play experience boils down to continuous cycles of "Press A...wait for it...NOW!" -- and it's frickin' great. 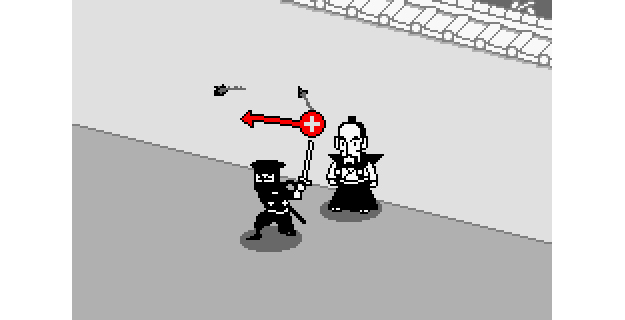 No "best game ever" would be complete without ninjas.

Coming from Japan, the game is awash in native cultural references. Intense, motionless samurai warriors; traditional festival song and dance; loyal ninja protecting their shogun: they're all here. Equally abundant are its oddities, such as space robots, clapping monkeys, flower-sprouting fairies, and conniving bacteria...among others. Yet the wildly varied scenarios each integrate perfectly with the accompanying music to create an engaging experience -- usually in a one-to-one relationship between audio and interactive elements. Different levels capitalize on specific properties of their music, to create a surprising amount of variety in the way each game is played. 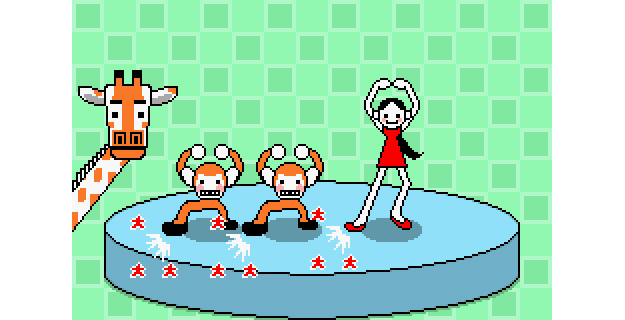 Imagine the following variation of Simon Says: an onion-headed man sits still as little wispy hairs sprout from his chin. They sprout with precise timing, accompanied by the clap of a wood block. Their positions directly correlate with the time they appeared, relative to the beginning of the current musical phrase. Now, you must use your tweezers as they move across his chin, pressing A to pluck his hairs using the same exact timing with which they appeared. The sound of a hair being plucked generates a portion of the music, and the duration of each sound corresponds to the length of the hair with which it's associated. This would be an example of how a microgame represents the timing aspect of music. Other games feature takes on entirely different musical properties: syncopation, volume, silence, tempo, or even isolating one particular beat or backbeat. 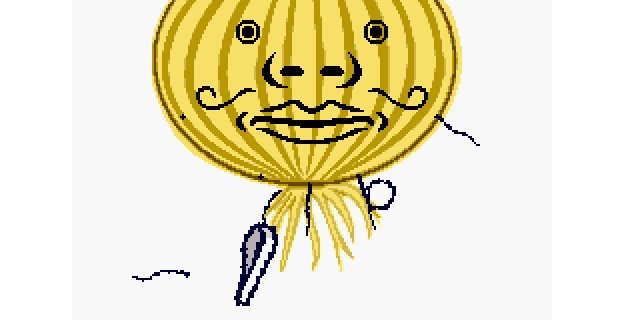 The sheer variety of games is very refreshing. And very weird.

One game involves a ghost behind a fence who is trying to fly past a gap in the fence. As the player, your job is to fire a bown and arrow into this ghost as he zips across the gap. As the ghost tiptoes toward the gap, he peeks his head up above the fence in time to the music. Each time, he peeks his head a little shorter and the music's volume fades. When he makes his mad dash across the fence gap, the music may well have faded to silence, forcing you to maintain the rhythm in your head to shoot the ghost successfully. It's not always easy, but it's always addictive. And this is just one example of visual connections with the music -- they're everywhere. 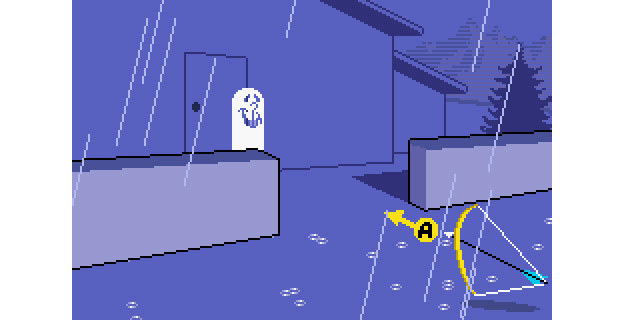 Go ahead, cross that gap. I dare you.

Some of the microgames can be ridiculously hard, either because they use unusual rhythmic patterns, because the song is unfamiliar, or because they put the player outside of their comfort zone. Games are traditionally a primarily visual medium, and thus people who play games tend to rely on watching the game to play it well. Rhythm Heaven takes advantage of this dependancy on visuals by removing visual input to create new forms of challenge. One microgame, for instance, features a samurai who slashes demons to the beat. When the big nasty demons come along, the screen turns almost completely black. The player can't rely on watching the demons position themselves into the right place, but must listen and feel the rhythm in order to slash the demons with perfect timing. 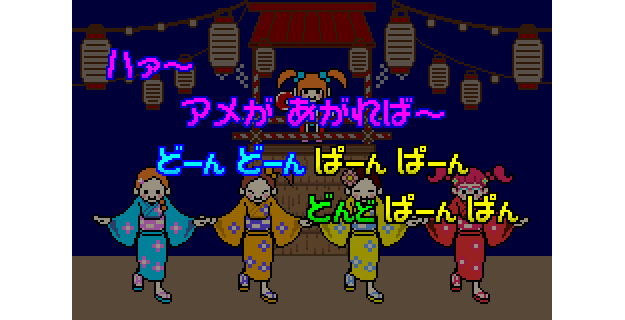 Find the perfect timing by listening, not by watching.

The study of musical theory reveals that repetition, tension, and release are predominant aspects of music. Rhythm Heaven uses a theme of repetition throughout its design. Individual microgames must be repeated until an adequate score is obtained, then again to receive an "Above Average" score (which earns a medal), and again until a "Perfect" score is obtained. Earning medals will unlock optional microgames which are a bit more toy-like than the others. Additionally, each remixed microgame -- the game's equivalent of a boss encounter -- repeats elements of the other games in its family. Additionally, the later families contain variations of previously-played microgames to which new twists are added. For example, three circus monkeys that clap to the music might be replaced with three cowboy monkeys that clap to similar but different music. The constant repetition of and variation upon microgames makes increases a player's familiarity with different scenarios and allows the game to work itself into a cohesive, enjoyable experience. 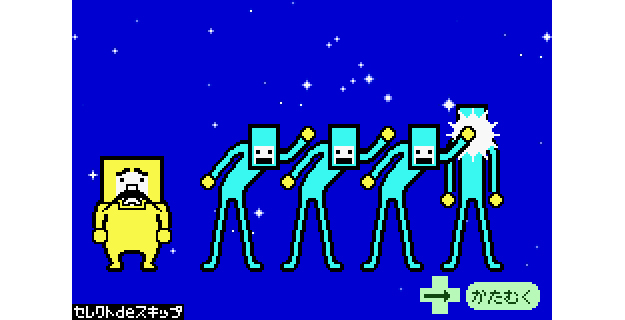 Rhythm Heaven could well be the perfect GBA game. The difficulty curve is smooth and carefully considered, and the final remix microgames of each family impress regularly with their ability and cut quickly between multiple tunes and games while feeling like a cohesive whole.

In fact, Rhythm Heaven's only flaw is that it had the misfortune to be released late in the GBA lifecycle and was presumably discounted for American release due to Nintendo's determination to focus on making the DS as popular here as in Japan. But music and rhythm and surrealism know no language barrier, making Rhythm Heaven an easy recommendation for any budding importer. The gameplay and goals easy to figure out and will inspire a huge smile on even the grumpiest of cynics. As one of the last great titles for GBA -- and arguably a superior experience to WarioWare in every conceivable way -- it's hard to imagine Rhythm Heaven not being a welcome companion for anyone's GBA.