Games | Xbox | The Chronicles of Riddick: Escape from License Butchery

Any gamer can tell you that licensed games tend to be of dubious quality. Any developer will retort that its hard enough trying to create a game under the best of conditions -- any number of things can go wrong, including budget cuts, personnel shifts, or excessive executive meddling -- and licensed games not only have to contend with these issues but also a host of dreadful handicaps that involve maintaining the integrity of the brand. Any designer at a small development studio trapped in the salt mines of licensed game creation can tell you countless horror stories about demands from marketing executives for arbitrary, often game-breaking changes the creators are contractually bound to make. Any marketing executive can tell you that he doesnt actually care how well the resulting game plays; they make their money the moment the game sells. Anyone who follows sales metrics can tell you that a games actual quality is only a small part of what determines its success at retail; far more important is the synergy -- dirty word that it is -- between all permutations of the intellectual property currently being pimped. In a contest between quality and branding, the suits will go with brand uniformity every time. Any consumer whos ever dropped $60 on a terrible licensed game can tell you that, from painful experience.

Games based on big-budget movies almost certainly have it worst. Not only do they go through the same development wringer as other licensed games, but theyre also forced to adhere to rigid deadlines to launch simultaneously with the films opening, allowing all the kids whose parents just paid $40 in tickets for a family outing to race right out to the store and talk those same parents into forking over another $60 for the ancillary game: An explosion of capitalism that leaves parents wallets empty and marketing executives rolling in money pits, their bodies as naked as their avarice. The thing is, almost all of the best games of the past decade have suffered some degree or another of delay. Quality takes time, and when you rush youre likely to wind up with crap. In that light, its a modest miracle that any movie-based games wind up even passable, much less good. And every once in a while, the odds are defied and a movie game turns out to be downright excellent. 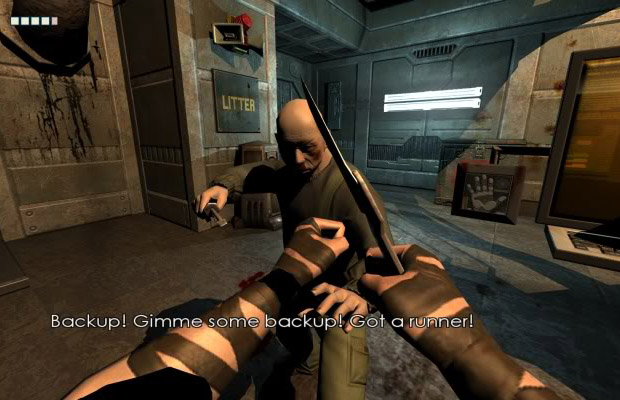 Take Starbreezes The Chronicles of Riddick: Escape from Butcher Bay, for example. The first thing the developer did right was not to base the game directly on the film The Chronicles of Riddick. It was a mediocre movie at best, and even a great film can make for a lousy game. Films are typically between 90 minutes to three hours long, much of which is usually tied up in dialogue or some other boring thing that doesnt involve people killing each other. This is fine for a movie, but it doesnt work so well in a modern videogame where players have come to expect at least six hours of carnage and dont take kindly to being forced to sit and watch events unfold. When developers try to shoehorn in some extra content to pad out the length, the results tend to feel pretty forced. Escape from Butcher Bay sidesteps the whole issue by presenting its plot as a prequel to the first Riddick film, Pitch Black. In this way, Starbreeze was able to tell a story without being forced to adhere too closely to the films plot while still offering those who enjoyed the film a familiar universe to play around in.

This choice had another distinct advantage: It let players control the badass Riddick from Pitch Black, not the neutered one from Chronicles. In Chronicles, Riddick was simply a reluctant hero. He was a cold, unpleasant man who eventually came to do the right thing after learning the importance of caring about others, much like Ebenezer Scrooge or the Grinch. In Pitch Black, however, he was an amoral force of nature. Though he did end up saving several peoples lives over the course of the film, he also wasnt above manipulating others for his own ends and even abandoning some to a messy death. His primary motivation in all situations was simply his own survival; god help anyone in his way. This is the Riddick the player sees in Escape from Butcher Bay. Hes a fighter and a survivor. He works with temporary allies but forms no attachment to them; their deaths are viewed more often than not as an inconvenience rather than a great loss of companionship. He slays his enemies without mercy or compassion. Riddick has no goals beyond simply escaping the Butcher Bay prison facility and evading his pursuers. Unlike his rather clichéd backstory from the film, Escape from Butcher Bays Riddick has no complex history described through tedious cut scenes. Clearly he has a past -- otherwise why would he be treated as a criminal? -- but its essentially irrelevant to his current situation. All that matters is that he keeps moving. 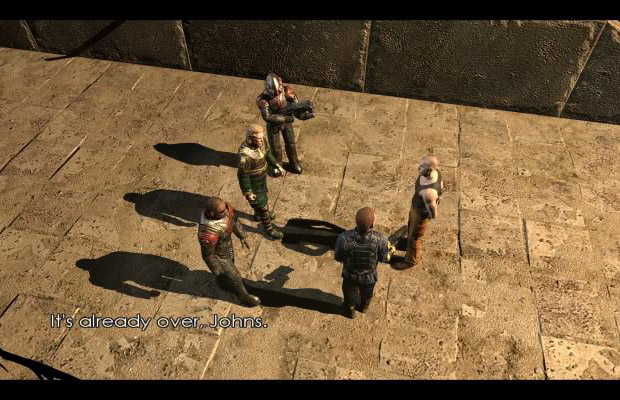 They say that in nature, the only instance when all movement ceases is in death, and thats how it feels with Riddick. He isnt a man with dreams and ambitions, but rather an animal that must keep running. In a medium which all too often feels the need to impose some sort of trite moral lesson onto the events which unfold in its stories, whether that be the love and friendship conquers all, featured in the climax of almost every Japanese RPG or the war is Hell, expressed in the world-weary gaze of every bald space marine in almost every modern shooter, Riddicks story is refreshingly existential. There are no moral judgments, neither condemnation nor justification for his actions. He simply does what he must to survive in his world.

And its a pretty fascinating world. The entirety of the game takes place within the grimy confines of the Butcher Bay prison and the caverns beneath it, with the player tasked with bribing, threatening, trading, or fighting his way out of increasingly difficult situations. Ironically, compared to the rigid linearity of most first-person shooters, the prison of Butcher Bay offers a great deal more freedom. There are certainly times where the player must simply proceed from point A to point B through a series of hallways, ventilation ducts, and stairwells, but generally the game is significantly more open than that. The player must interact with other prisoners to round up items and weaponry in exchange for favors and to determine who must be eliminated lest they prove to be an obstruction to his eventual escape. Just as in real prison, small amounts of cash and cigarettes go a long way towards getting what you want, be it a nice, sharp piece of metal or a timely distraction. The player must also gauge the guards to determine which ones are counting down the minutes until they can punch out at the end of their shift and which ones are waiting for any excuse to start gunning prisoners down where they stand. And while the game does occasionally imply how to proceed, for the most part the player is totally on his own in figuring out how to turn the tools at his disposal, whether they be alliances with fellow prisoners, a shiv, a big wad of cash, or a distracted guard, into an escape. Obviously its not nearly a freeform RPG such as Fallout 3 or Knights of the Old Republic, but for a game billed as a first-person shooter, its pretty unique. 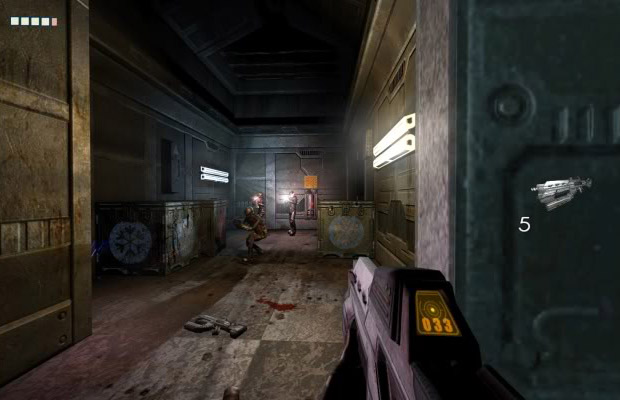 All too often the first-person view, ostensibly utilized to grant a greater sense of immersion, simply becomes just another angle from which to witness videogame mayhem. Sure, it does serve to make the action more intense at times, but one can only look down the barrel of a gun to blast a slobbering alien soldier so many times before it begins to feel less visceral and more repetitive. Even in a war zone, people usually spend a great deal of time not shooting at things, so any game that is purely shooting is going to feel at least a bit removed from reality. Escape from Butcher Bay puts the first-person view to excellent use in furthering the players sense of immersion. Few of us are likely to wind up in an intergalactic prison facility, its true, but by interspersing significant amounts of character interaction and logical problem solving -- things we all can relate to -- with moments of all-out mayhem, Starbreeze helps us connect more with the overall experience.

Those who are looking for a game where they just kill everything in sight may grow bored with Riddicks frequent need to converse with other characters or scrounge up particular items, but those looking for a real adventure will have found a game thats a perfect fit. From the quiet moments when the player wanders the prison yards talking to other inmates to the wild prison break moments in which all hell is breaks loose, Escape from Butcher Bay feels like an organic, immersive experience. Not too bad for a licensed game based on a crappy movie about an amoral murderer.