This trend would continue until 2006's Twilight Princess, when the wishes of 1998 would take root in a cross-platform adventure very much like Ocarina of Time. And while Twilight Princess caused millions of fanboys to cease their clamoring, satisfied at last, gamers were left with a lingering sensation that the Zelda series had suddenly become safe, dependable, and reliable.

The Legend of Zelda: Majora's Mask is a complete rejection of the "safeness" Twilight Princess symbolizes, and is even more experimental than the cartoony coating given to the controversial Wind Waker?. Largely ignored on its release day by people who were braving sub-zero Best Buy parking lots to get their hands on the hottest thing on out post-Y2K earth, Sony's PlayStation 2, Majora's Mask may represent the most change we've seen in the Zelda franchise since Zelda II. And by change, I don't mean "the addition of utter madness and frustration incarnate." 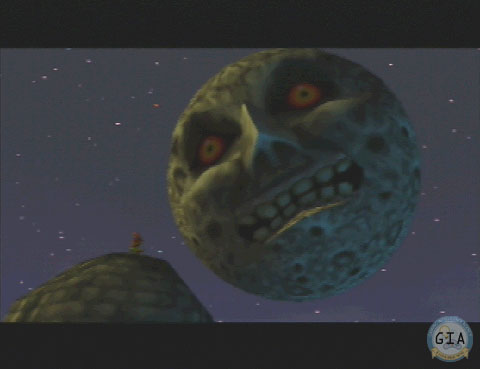 Retelling the same basic story has always been the Zelda series's thing. Alas, this quality couches the series in a tradition that tragically provides a chance for well-meaning nerds to hypothesize convoluted and nonsensical timelines that somehow connect the various Hyrules throughout the ages. But, as with any retold story, the warm sense of familiarity that goes hand-in-hand with playing a Zelda game and picking up on new iterations of the series' famous iconography is worth the intellectual despair of its most ill-advised fans.

On principle, Majora's Mask can't be anything but familiar; the game uses many of Ocarina of Time's assets, after all. Seeing as the game throws Ocarina's young Link into a sort of parallel, budget-minded dimension, you will find most of your old Hyrulian friends while wandering through the land of Termina. However, in Majora's Mask, the warm fuzzies that Zelda tradition usually brings is replaced with a cold, creepy sensation that something in this new world just isn't right. It could be the twisted characters, or maybe the surreal surroundings. Perhaps it's the menacing, grimacing moon in the sky, threatening to end all life?

It's mostly that last one.

The "gimmick" of Majora's Mask is that you're thrown into a world where doom is imminent; in just three days, the moon will smash into the earth, and there's not a damn thing you can do about it -- at least not until much, much later, anyway. The moon hangs in the sky of Termina, growing larger with the passage of time, a constant reminder of just how screwed every living thing is. This would be a big problem for Link if he wasn't immune to the end of the world, but, as the Hero of Time, he can shrug off a little thing like the Apocalypse, should it happen on his shift. And, as a bonus, he gets to watch people live out their final days over and over again until he can finally do something about this whole moon issue everyone keeps going on about. If that sounds disquieting, well, that's because it's supposed to be. 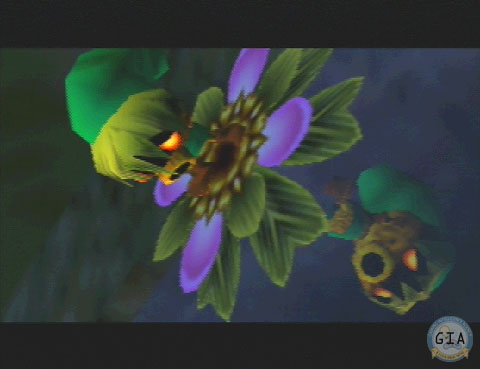 The Groundhog's Day quality of Majora's Mask would be a gimmick if not for the fact that the entire game explores the time concept with impressive thoroughness. The game arrived right around the time that the notion of building living, breathing virtual worlds that changed with the passage of time really began to catch on with both developers and gamers alike. The best -- or possibly worst, depending on who you ask -- example of this would be Shenmue, a game with a huge, explorable world operating within day and night cycles...but with very little to do, unless you enjoy feeding stray cats. Majora's Mask takes the same approach as the aforementioned Dreamcast bomb, except for that whole "lack of content" thing. All around Link, something is always happening, no matter the time or the day; and on the rare occasions that something isn't, Link's handy ocarina can always fast-forward to a more interesting time of day -- something Shenmue's Ryo definitely couldn't do. Majora's Mask's time mechanic was meant to be more than just an impressive tech demo; it was designed to show your impact on an ever-changing world in peril, and it does this very well.

In the world of Termina, things happen without Link's intervention or approval. At the journey's beginning, Link is confined to Clock Town -- so the player has no idea that, on the first night, cows are being abducted at the farm just outside of town. But later in the game, should you decide to help out these comely farm lasses, you soon realize the catastrophic consequences if you fail at defending the cows; one of the girls becomes catatonic while the other slumps into a deep depression in the (literal) face of an earthbound moon. All of this happens time and again throughout the course of the game, regardless of whether or not Link is present to witness it. And even if he helps the girls, though he does get to keep the rewards this subquest yields, his actions are ultimately for naught when the time cycle starts again. Upon returning to day one, Link finds the farm's proprietors are still anticipating an attack of the cow snatchers. In Majora's Mask, the word of the day is "nihilism."

Knowing this, you might assume that it's hard to sympathize with characters whose lives you can barely touch. This is hardly the case; over just three days, Majora's Mask makes all (well, most) of the characters' lives and schedules an invested part of this very real world. The game's end-times setting should motivate even the most hardened gamer to assist the doomed populace of Termina. And since the overall theme of the game is helping people, you'll end up playing the Good Samaritan whether you like it or not. 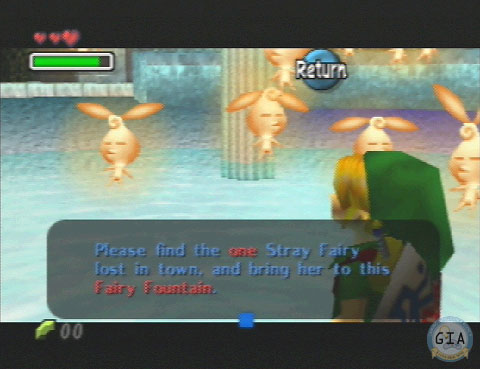 So, for being such a unique, inspired game, why is Majora's Mask largely dismissed by the Zelda majority? The answer: it's a challenging game. Not challenging in the Super Ghouls 'n Ghosts? sense, but personally challenging. Gamers are known to be anal, OCD-laden creatures (see: Riviera), and the very thought of a time limit in a Zelda game caused many to blow a gasket. Never mind that you can slow time; never mind that you can get most tasks done within the three-day time limit; never mind that the game doesn't actually end at the end of the third day. Having to carefully plan out objectives while allotting for time was just too much for a certain mindset, and, with regard to the fact that Link is stripped of all but his most essential items (he loses rupees, arrows, bombs, and other easily-attained loot) when the time cycle starts again, we're probably lucky we didn't see some sort of Nintendo riot on October 26, 2000.

Majora's Mask commits many more sins against the Ten Commandments of Zelda. The game has only four dungeons, but its vast overworld is literally a dungeon in itself, with a variety of things to do; this is an improvement over Ocarina of Time, where exploring the overworld meant taping down the "horse" button and making a sandwich. (And the less said about Wind Waker's ocean, the better.) Majora's Mask also goes against Zelda tradition by placing less of an emphasis on Link's utility belt in lieu of the many masks he receives throughout the game. Yes, very few items are carried over from past adventures, but Link can transform into one of three horrible (yet lovable) races first seen in Ocarina of Time. You haven't lived until you've seen the Deku mating ritual! Then you will die shortly after.

The most notable thing about Majora's Mask's challenging quality is just how authentic it makes your experience in Termina; you're put directly into the shoes of Link, and made just as powerless as he is in this strange new world forever on the brink of destruction. And you can't even dawdle, since every second of the game is part of the doomsday countdown. Whether it comes from the tick-tock tempo of Clock Town's music or the minor earthquakes that happen on the third day, you always have a constant reminder that something much, much, bigger is happening around you. Even the game's save system places you in Link's predicament; saves made anywhere outside of the beginning of time cycles are temporary and disappear when you load them, meaning that you must start from the first day - just like Link - if you want to revisit what happened earlier. It's unsettling, effective, and one of many reasons Majora's Mask works so well.

Majora's Mask represents Nintendo's spirit of invention. It's an experiment that, for the good of the franchise, should be replicated again. As solid as Zelda games have always been, in their dependability they're beginning to grow a bit forgettable. With the next Zelda on the Wii, though, we can at least hope Nintendo will do something as weird and wild as Majora's Mask. For something that could have just been a simple Ocarina of Time expansion pack, it's one hell of a game. 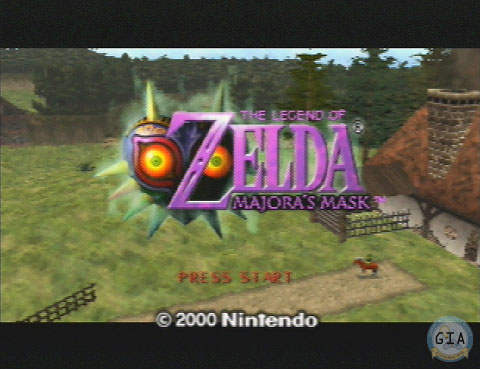 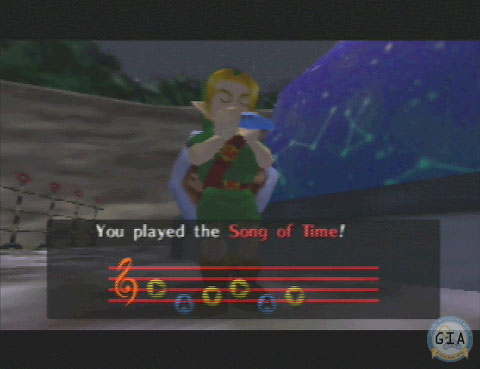 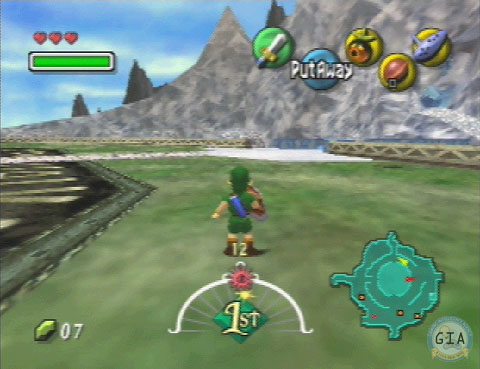 Images courtesy of The GIA