The best-known guitar playing sim is, without a doubt, Guitar Hero. Well, for now, anyway. We've all played it, at least at parties, strumming (?) along on a plastic guitar to that ubiquitous genre of music known as "dad-rock." But before Guitar Hero made us all virtual music stars/heroin addicts, Sony PlayStation's Um Jammer Lammy was way ahead of the game. Made in a time when you could actually sell a music game with a pitch like, "You're a cartoon lamb musician in a storybook world," Um Jammer Lammy could possibly be the finest rhythm game ever created. Yes, even greater than its predecessor, Parappa the Rapper?.

Note: The lack of any Guitar Freaks mentions in this article is because those games were, at best, thoroughly mediocre and forgettable. 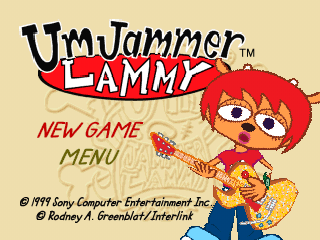 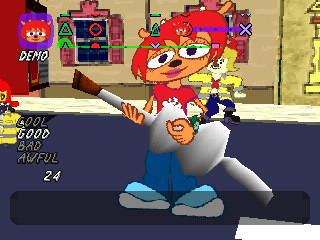 1997's Parappa the Rapper was undoubtedly a hit. Designer/musician Masaya Matsuura created a bold and remarkably whimsical rhythm game the likes of which the world had never before seen. The quaint, barely-English lyrics, the cute puppy protagonist with a passion for botany (his girlfriend is a flower), the listen-and-repeat gameplay: all of these features added up to a memorable title, along with a pseudo-mascot for the PlayStation brand.

Two years later, Um Jammer Lammy was released, improving on the amusing Parappa tenfold. Features unavailable in the original game were added to the sequel: two-player co-op, two-player competitive play, twice the number of levels, full-screen cinema scenes and a variety of other odds and ends. While Parappa was an experimental (and innovative) diversion, Lammy took its essential parts and made a real game out of them.

Um Jammer Lammy, however, did not make the splash that Parappa did...at least not in the United States, anyway. The reason? It could be that people didn't know what an Um Jammer was. (And really, who does?) It could be that fans of the original title didn't know that Um Jammer Lammy was hiding a completely new Parappa game on the disc. Or, it could be that while people were willing to control a rapping dog, a guitar-playing lamb was just going too far. Whatever the case, Sony believed that Um Jammer Lammy was going to break new ground for music games, as Parappa had done in the past. The company even had a webcast launch party, with cast members performing songs from both Parappa and Lammy. It was quite the time to be alive. 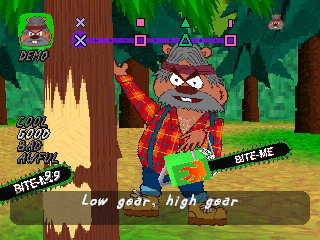 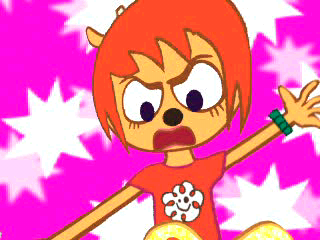 However, history was not as kind as it should have been; Um Jammer Lammy did not receive the success it deserved, so developer NanaOn-Sha decided to take a big step backward a few years later with Parappa the Rapper 2?, a game as broken as it is tepid. Today, Parappa and all of his flat animal friends are dead and buried. It's a tale that should have had a happy ending.

What makes the flopping of Lammy so tragic is that the follow-the-leader gameplay that Parappa made famous is both better and more fun to play around with in the guitar context. In Parappa the Rapper, you're told to repeat what your rapping masters say specifically, hitting buttons to repeat words or sometimes a series of words. Though to truly be "cool," you're asked to take these words and go freestyle, which is where the game veers away from "real" rapping and heads into the lyrical equivalent of a ransom note made of Mad Libs.

It may be funny to make Parappa say inappropriate things about crack -- and you're not the only one to do this in Cheep-Cheep the Cooking Chicken's stage -- as his rhymes become more and more elaborate, freestyling becomes less intuitive. Eventually, it's only fun for the sake of wacky syntax.

Freestyling -- or soloing, in this context -- in Lammy is more intuitive, and produces results that most would deem "musical." The levels in Lammy can really be played three ways: strictly echoing the words of your master with a guitar, musically coloring a little outside the lines, or going full-throttle and achieving a cool rating (and in the process becoming your own solo act). As in Parappa, you're left to your own means once you become "cool" -- and soloing over rhythm, bass, and drums is a lot more fun than stitching together a jumble of mismatched words. 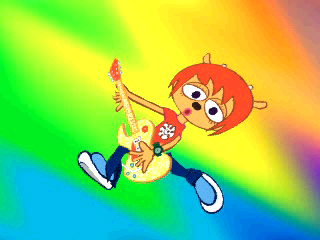 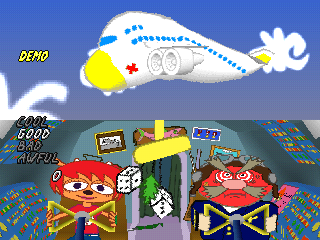 All of the fabulous gameplay would be for naught if the music in Lammy stunk to high heaven. Thankfully, the tunes are great and offer a variety of different styles: funk, surf rock, metal, rockabilly, and pop. Parappa also gets a rap remix of six of Lammy's seven songs (remember, this game was made in Puff Daddy's heyday), though he finds himself in her levels to perform them for reasons that are apparent to no one. It should be noted that Um Jammer Lammy has one terrible, terrible song, which is appropriately played in Hell. (Don't let the censored localization fool you into thinking it's an island.) Somehow this abominable level inexplicably made the cut, though it can be completely forgotten after a single playthrough.

Um Jammer Lammy once again features the artwork of Rodney Greenblat, the man who gave Parappa the Rapper its distinctive look of "Richard Scarry meets subway graffiti." Everything is moving, everything is vibrant, everything is alive, and, most importantly, everything is united into one super-happy philosophy of graphic design. And while Lammy may not be as iconic as Parappa, she's an interesting character outside of her design. With Lammy, we have a female character without massive breasts (hell, she's missing front-shapes altogether), who is not obsessed with boys or life's trinkets and trivialities; all she wants to do is try her best.

It's no wonder this game flopped.

Um Jammer Lammy is absolutely not to be missed if you have the slightest interest in music games. And despite the constant comparisons to Parappa the Rapper, Lammy's predecessor is by no means a bad game. It's just that Lammy was the true evolution of the rhythm game genre after Parappa, and was sadly ignored by the people who should have loved it most.