In the early '90s, several Konami employees grew tired of churning out sequels to other people's properties and struck out on their own to pursue fresh creative ventures. With Sega as a publishing partner and Contra III? as a creative template, Treasure was born.

Your mission: move right and shoot everything.

A few of Treasure's new staff had actually worked on Contra III while at Konami and decided to make their company's debut stand out by turning the "Run 'n' Gun" formula on its head with unique weapon combinations and virtuosic programming. The result was Gunstar Heroes, one of the finest action games ever made.

While the standard formula of running to the right killing bad guys until you reach the obligatory boss fight at the end of each level is still the game's modus operandi, Gunstar Heroes shakes up the genre in several ways and successfully keeps its action feeling fresh. First and foremost, players have four types of weapons at their disposal: Force, Lightning, Chaser, and Fire. These powers can be used individually or combined for a total of fourteen different configurations.

Finding a pairing (or pairings) that works best for your style of play is the key to getting the most out of the game, but here's a hint to get you started: the homing Chaser gun combines rather nicely with just about everything. You can also select between fixed and normal shots -- that is, whether your character can fire while running or stands in place while shooting. (Fixed makes you more vulnerable to enemy fire but lets you aim more precisely, and it nets you a totally sweet bandana as a bonus.) Throwing, climbing, and slide-tackling round out the controls.

Gunstar Heroes also features a dash of Mega Man with selectable stages and a mentor named Professor White. Stage themes cover a fairly creative gamut of settings, from jungles and cities to underground mines and giant airships. A space-based shoot'em-up and a board game stage break up the standard platform-based gunning. The action is constantly fast-paced and nothing feels like filler -- not even the boss rematch stage later in the game.

Speaking of, Gunstar Heroes' boss fights are famously great. The large multi-sprite foes manage to be both challenging and fun without feeling cheap. The legendary battles against Seven Force fight is particularly memorable, as the robot mecha can transform into -- wait for it -- seven different forms, including a tiger, an eagle, a crab, a running man, a sea urchin, a snake, and a gun. It really set the tone for Treasure's catalog; the company's later games would later take boss fights to new levels. Alien Soldier?, for instance, made an entire game of them.

Plenty of multi-sprite bosses to go around, including Seven Force (bottom left).

The graphics in Gunstar Heroes were amazing at the time and still impress, particularly given that it runs on a machine known for its flat color palette. In fact, describing them practically demands hyperbole. Colors pop off of the screen with frantic action and fiery explosions, suffering little-to-no slowdown even in two-player mode. While not quite as incredible as the visuals, the music is catchy and energetic despite the Genesis's reputation for tinny sound, and the tunes are complemented nicely by the crisp sound effects and voice samples. 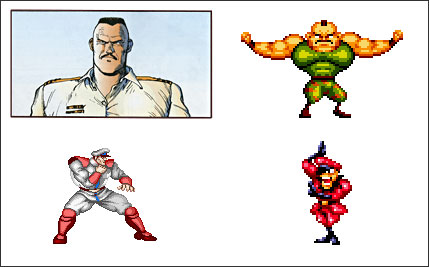 Homage is French for rip-off.

With a few exceptions, anime and manga character designs tend to be pretty generic, and video games are a particularly egregious offender in this area. In Gunstar Heroes, though, you can see the seeds of the Treasure's signature unique take on anime tropes -- even if they did rip-off the "Colonel" design from Akira? and a certain boss character from Street Fighter II?.

In a surreal twist, all of the game's characters are named after colors. Players take the role of either Red or Blue (or both, in two-player mode) with assists by their sister Yellow as they battle her brainwashed older brother Green. It sounds more like a game of Twister than a video game plot, but if you are confused: one involves the chance of accidentally falling on a member of the fairer sex, and one does not. (Hint: tragically, this game does not.) 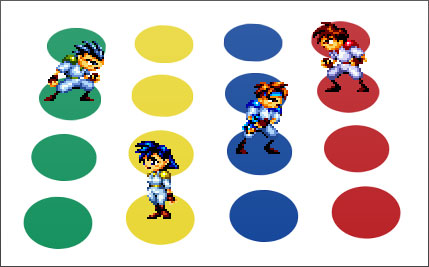 Wait! Green is my brother?

The plot is convoluted, told in the broadest strokes possible via cut scenes in the game's attract mode and ending. Without reading the manual, you'd be hard-pressed to understand Green's storyline. It's a small nitpick though, and really, action games are rarely known for their storytelling. For that matter, Treasure is hardly known for being able to tell a story coherently at all.

All in all, Gunstar Heroes has all the ingredients that would become Treasure's trademarks: a bizarre plot with wacky characters, programming tricks that push the hardware to new levels of spectacle, and a unique (if initially daunting) control scheme that offers superior control for those who master it. These three consistent factors appeal to a small but loyal group of gamers and are why Treasure has such a worldwide cult following today.

Luckily, for all its inspired quirkiness, Gunstar Heroes is pretty easy to pick up and play, making it an ideal game to serve as a litmus test for newcomers to see if they, too, are future Treasure fans.