It's a good thing we're not rating Virtual Console games here, because Kid Icarus totally breaks the thumbs up/thumbs down scale. It deserves a thumb sideways. It is the epitome of the "you had to be there" video game. Those who grew up playing it saw its small innovatons: its character development, its hints of free exploration, the way its story was reflected in the level design. But those exposed to it for the first time today are more likely to notice its shortcomings.

Kid Icarus hasn't aged gracefully, but one could formulate many compelling arguments for why it remains a good game. There's a creative platformer beneath the flaws that nostalgia so often glosses over. In short, it's the kind of game that anyone can appreciate, objectively, but that they may not necessarily like. 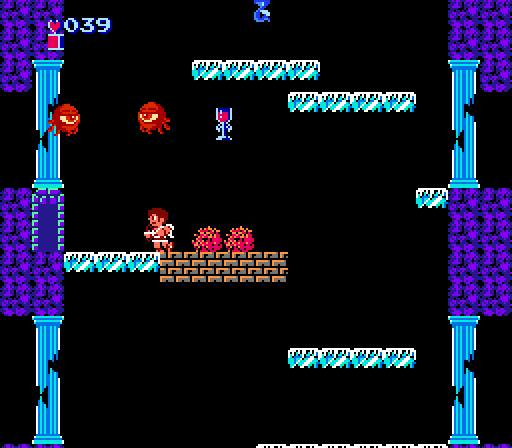 Scrolling upwards instead of to the left? How novel.

Kid Icarus was released alongside Metroid for the NES, and in many ways, they appear to be siblings. Both made it to the U.S. in similar silver packaging that stood out from the black boxes Nintendo had used to that date; both allowed players to resume their quests where they had left off (using lengthy passwords in the NES or via a much more convenient save system on the Japanese Famicom Disk System); both were produced by Gumpei Yokoi, who would go on to create Nintendo's greatest success (the Game Boy) and its most epic failure (the Virtual Boy).

But where Metroid introduced more truly revolutionary ideas -- its open-ended exploration and tantalizing glimpses of areas inaccessible without possession of the proper equipment were nothing less than a revelation in 1986 -- Kid Icarus stuck a little closer to its platformer roots. Yet within that fledgling genre, it still managed to offer some incremental advances: items, shops, character upgrades, and labyrinths. 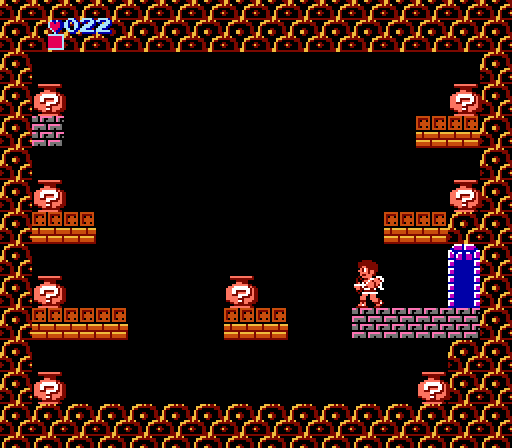 The treasure rooms would always yield great riches -- if you learned the pattern from Nintendo Power.

Everyone who played Kid Icarus shortly after its release was impressed by its small flourishes. It was one of the first platformers to incorporate what would be labeled as "RPG elements" nowadays; your character had a health bar that depleted when you had a run-in with enemies or environmental hazards and recovered when you used certain items. Scattered throughout the levels were various chambers that contained shops, treasure rooms, rooms full of deadly enemies and more. Defeated enemies dropped Hearts, which acted as the currency of the realm -- handy for buying items in those shops. Additionally, Kid Icarus kept track of how many and what type of enemies players killed. Take down enough (effectively getting enough "experience") and you were rewarded with arrow power-ups or health upgrades. 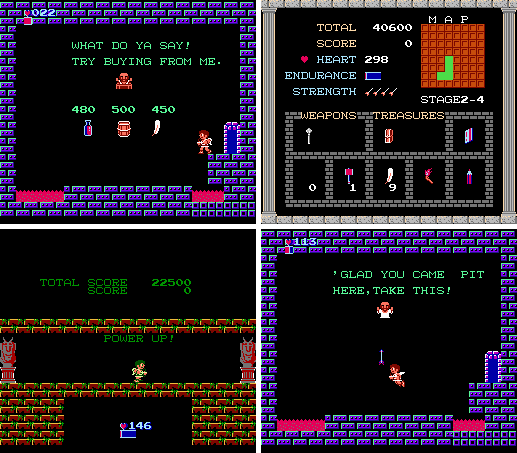 While these innovative elements made Kid Icarus shine back in its day, the game's control scheme makes it feel terribly dated. Struggling to control Pit can be downright off-putting for those first-time players; Kid Icarus simply doesn't control as well as we've come to expect from our 2D platformers. One could even argue that it doesn't control as well as Super Mario Bros., which predated it by a full year. The jumps suffer from the classic second-rate platformer affliction of floatiness. Perhaps the developers figured that Pit, being an angel, would be held aloft a bit by his tiny wings. Intentional or not, it's simply not enjoyable. Worse, Pit suffers from inertia and momentum, so if you don't actively stop yourself when you land from a jump, you'll take an extra step or two...often right over the edge of a bottomless chasm.

The jump control wouldn't be a game-breaker if not for the fact that nearly half the game consists of jumping from platform to platform while scrolling vertically upwards. These aren't like the chambers of Metroid, which allow bi-directional scrolling, but rather like vertical takes on Super Mario Bros.' levels: a one-way trip. Here, though, "one-way trip" means falling down a now bottomless pit to your doom rather than just being stuck at the edge of the screen. Add to this the unfortunate fact that both ducking and dropping through a platform are both executed by simply pressing down (unlike, say, Contra?, in which you have to press jump while holding down in order to drop through a platform) and you have a formula for gamer fury. Enough platforms can be dropped through that accidental deaths while reflexively ducking to avoid enemies is entirely too common. 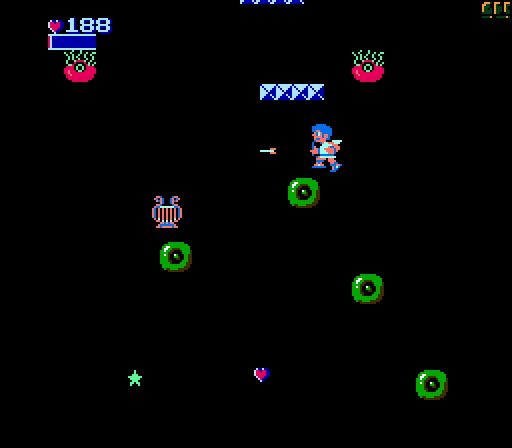 By the time you've made it to this level, you're probably skilled enough to make these tricky jumps...
but you will have fallen to your death hundreds of times before getting here.

The innate tension between once-clever innovations and contemporarily questionable design is at the heart of a modern Kid Icarus experience. Can you enjoy the experimentation of the game while putting up with all the relics of a less-refined era? If so, then you'll enjoy playing. If not, then you'll wonder what everyone was raving about back in the day.

Even the music provokes its share of controversy. Composed by Hirokazu ("Hip") Tanaka -- best known for his Metroid tunes -- Kid Icarus's soundtrack is actually more experimental than Metroid's. It features some very interesting harmonies, along with chromatic tunes, making for some very sophisticated compositions. Which is good. It is also quite often extremely high-pitched. Sometimes annoyingly so, to the point that the title screen theme is a bit like being stabbed in the skull with an icepick. Which is bad. 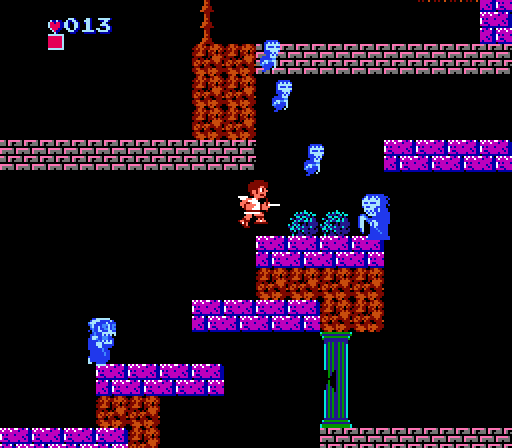 The Grim Reaper's screaming is pretty hard on the ears as well.

The fortresses also demonstrate both innovation (for its era) and poor design (in hindsight). The final stage of every world consists of a labyrinth of interconnected, single-screen rooms -- it's similar to Zelda, except that you traverse them using the same 2D platforming gameplay as in the rest of the game. Even more similar to Zelda are the check sheet and torch, which are somewhat analgous to Zelda's map and compass. Fortresses are also where all those mallets accumulated over the course of the adventure come into play, allowing Pit to free his centurion allies that have been turned to stone throughout the level. Once freed, these warriors join you as extra firepower during the fortress' boss battle. 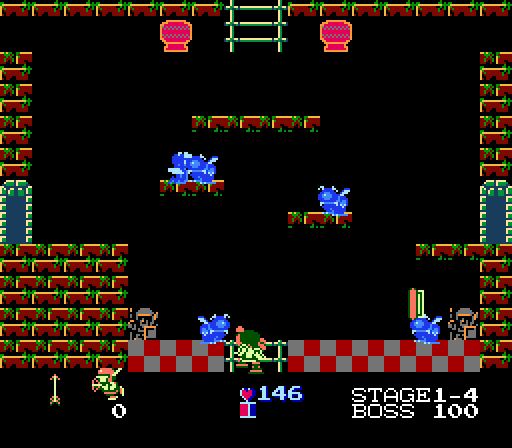 Ah, the joys of free-roaming exploration.

The fortresses add a new experience to the game, but they can also be frustrating. They often contain rooms full of swarming enemies or dangerous spike traps and require some of the most precise jumps and split-second reflexes in the game. They also contain the infamous Eggplant Wizards. These wizards are big and tough like the Grim Reapers encountered elsewhere in the game, but instead of screaming and summoning little reapers to attack you they throw eggplants. No big deal, right? Ah, but let their projectiles hit you and you turn into an eggplant yourself. You can't fight while an eggplant, merely run around, so you can't complete the level until you find a nurse in the fortress to cure you of your condition.

Naturally, Eggplant Wizards are generally stationed at vital chokepoints in the fortresses, often in rooms full of hazards which make their infuriating attacks difficult to avoid. You then must backtrack to a nurse to begin the challenge of getting past them once again. 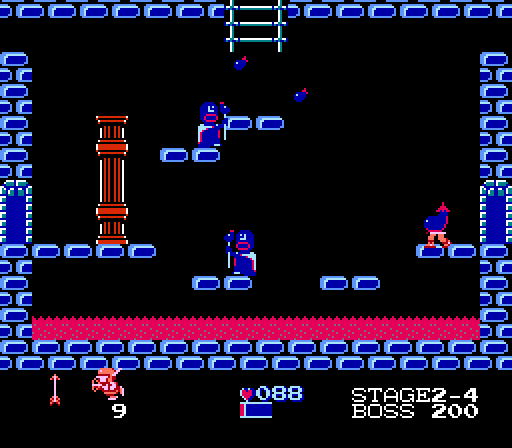 The instruction booklet described being turned into an eggplant as a fate worse than death.
That was really only the case if you stumbled into the final boss room while still an eggplant.

Though the specifics of its level design can occasionally be infuriating, Kid Icarus uses the grand arc of its level progression and enemy design to tell a story in a way that few games before or since have done. Unlike its contemporaries, it has no ice world, no lava world, no tree world, no mechanical world. Rather, its stages are a logical progression from one area to another. It has no cut scenes or expository dialogue until you finish the game. Rather, the tale of the journey is told by the levels themselves.

Pit begins having escaped from his prison into the depths of the underworld. He is young, weak, and powerless save for a simple bow given to him by the captured goddess Palutena. He begins in the lowest level of the underworld, dead and brown, and progresses upwards. He gradually begins to see more greenery and signs of life as he advances, suggesting he is nearing the overworld. Once in the world of the living, everything is lush. He now travels a great distance (horizontally) which the game shows by day eventually giving way to night. Since the overworld is less under Medusa's control, there are many more shops and rooms to upgrade. At this stage, Pit is growing in technique and strength. At the end of the overworld palace, he once again ascends upwards -- this time through the skyworld. There are even more examples of Greek-style architecture as he makes his way through the skyworld, letting you know that you are getting closer to your destination of the sky palace of Angel Land. Once he finally reach and make it through the final fortress, Pit equips himself with the three sacred treasures and becomes a flying badass. The final level is a set piece where he obliterates all opposition and makes short work of Medusa. 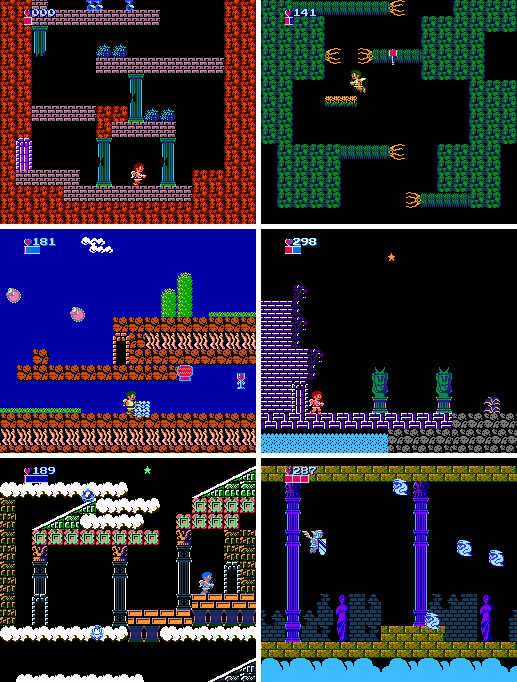 If you ever stopped to admire the scenery, you realized how much thought was put into it.

While the game does a great job of depicting Pit's journey and growth as a warrior, the downside is that the challenge level reflects this growth. He's young and weak at the beginning, making the first few levels incredibly difficult. Clear the underworld, though, and Pit becomes stronger -- and the game becomes progressively easier, leading up to the final level, which is an absolute cakewalk. The fact that the difficulty curve is backwards makes the game extremely frustrating at the beginning, a real turn-off for first-time players.

Kid Icarus is a good game, and it has aged better than many of its contemporaries. But it has aged. While many people have fond memories of it (enough so that it frequently shows up on lists of best NES games), it's easy to understand why someone who plays it today for the first time might fail to enjoy it. Buying it is, frankly, a complete risk -- you might love it, or you might find it intolerable.

But even if you hate it, at least you'll finally know where that new guy in Super Smash Bros. Brawl? comes from. 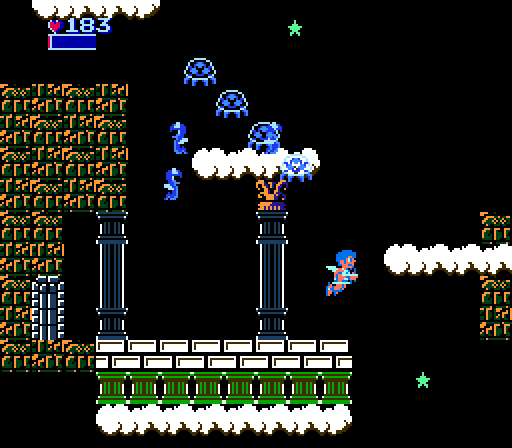 The only thing that would have been cooler than these Metroids in Kid Icarus? Eggplants in Metroid.