At this point, you don't need an article telling you that Punch-Out!! is one of the best games ever released for the NES, with or without that earbiter Mike Tyson. A basic sense of gaming history is all it takes to realize such a fundamental fact. So rather than dote on it in general terms, let's have a look to see why it was not only a great game for its time but remains an amazing experience today.

1. It cribs shamelessly from Rocky 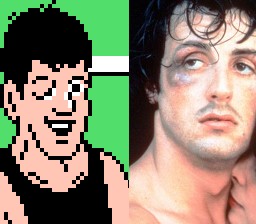 Cut from the same cloth

Rocky is a beloved cinema classic because it so deftly tells the story of an everyman who manages to live the American Dream. Sylvester Stallone plays the little guy -- a nobody with nothing to his name but a big heart and the desire to succeed. Against all odds, he trains, gets fit, earns to the right to fight the champ, and goes the full fifteen rounds with him.

Punch-Out!! mirrors this theme by making your protagonist the tellingly-named Little Mac, an aspiring pugilist who must face a bevy of opponents on his way to the dream fight. Granted, Punch-Out!! began its life in the arcades, odd double exclamation points and all. There, you didn't play as the midget Little Mac, but rather as a full-sized boxer. Still, his body was a green wireframe, so don't doubt for a second that he was teased by the other kids in school. Yet despite the protagonist's physical disfigurement, the arcade game nevertheless lacked the charm of its NES conversation because it failed to capture the underdog charm of Rocky. It was, fittingly, the NES's hardware deficiencies that elevated the story. 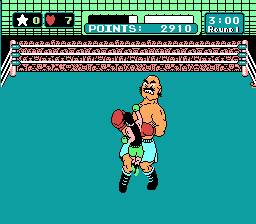 "Please don't crush my head with your fist."

Despite running on a powerful new chip to animate the massive sprites of Mac's opponents, the NES was much too anemic to render a wireframe character or offer any sort of transparency. Some genius at Nintendo realized that the key was to shrink the main character. And with the protagonist reduced to half the size of his opponents, the other boxers and their detailed moves and facial expressions could be seen. This gameplay conceit had a profound effect on the game's storyline. You character was now, quite literally, a little guy. Stallone's a short dude, but he towers over Little Mac. That the hero had to jump in order to hit his opponents in the face, that his opponents' gloves were twice the size of his head -- these details really gave the sense of a true underdog.

That, and the fact that he preferred to jog in a pink jumpsuit.

A good story has both a great protagonist and a great antagonist. The creators of Punch-Out!! knew this, and that's why they developed the MMC2 chip. This enhanced NES cartridge allowed them to animate each physical feature of Little Mac's opponents with unprecedented detail. Of course, it's easier to provide low-resolution characters with personality if you use broad, comical strokes.... which is probably why they made the player's opponents such blatant ethnic stereotypes.

Glass Joe is an effete, cowardly Frenchman. Great Tiger is a mystic from India. Super Macho man is a narcissistic, well-tanned, body-building Californian. Soda Popinski is... well, let's just say that in the arcade he was known as Vodka Drunkenski.

So, we can't really call the rival boxers in Punch-Out!! deep characters. We can call them insensitive, but that misses the point. The fact is that they all had personality in an age where the most information we got about most video game villains was that they'd kidnapped some princess or another. In Punch-Out!!, the characters would talk to you in between rounds. Piston Honda pandered to the camera ("Where's the NHK TV camera? Hello, Tokyo!"), Mr. Sandman made puns on his name ("I think you're gonna have a nightmare tonight!") and Soda Popinski referenced his bowlederized alcoholism ("I drink to prepare for a fight. Tonight I am very prepared!"). Yet the explicit dialogue was only a single piece of what made the opponents so endearing; the boxers' personality came through in their huge and cartoony presentation. Their facial expressions and motions made them meaningful adversaries -- and tied in to the gameplay, too.

3. It's Dance Dance Revolution for your control pad 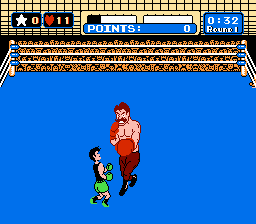 And the music is better than J-Pop

A boxing match has a real rhythm to it -- the give and take of punch and counter-punch. Many people compare boxing to dancing, and that's just what Nintendo captured in its video game form. They distilled boxing down to its essence, like other successful sports games at the time did to their own respective sports. By boiling the action down to avoiding getting enemy punches and then retaliating, Nintendo transformed Punch-Out!! into a Bemani game. Before Bemani even existed! That's quite a trick.

Where Konami's music games feature notes that scroll across the screen to cue precise button presses, Punch-Out!!'s opponents' overexaggerated tells are your clue that you must dodge left, dodge right, duck, or block before counter-attacking. The patterns of each boxer create a a sort of musical flow that can be felt and reacted to. You can even "improvise" by hitting your opponents early or late, and you'll be rewarded with bonus stars (which enable powerful uppercut attacks) for your effort. The boxer-as-song analogy is further strengthened when you realize that the time that's passed in the current round influences your opponents' actions, too.

Not to be too overblown about this -- after all, it isn't as if Punch-Out!! was the only game of its era whose gameplay consisted of using quick reflexes to react to things that would suddenly appear on screen, abetted by pattern memorization. It just pulled it off with more style than most of its peers.

The version in which Mike Tyson serves as the final boss certainly adds to the game's kitsch value, but ultimately Punch-Out!! is an amazing experience regardless of who beats you to a pulp in the dream fight. It's rare to see a game that comes together so elegantly and brilliantly, and Punch-Out's fantastic blend of elements makes it a game that deserves a channel slot on anyone's Wii.

Some images courtesy of The Video Game Museum