Let us imagine a scenario under which Teenage Mutant Ninja Turtles, an NES platformer featuring the famous adolescent abberant ass-kicking amphibians, is a worthwhile download for Nintendo's Virtual Console.

We will take as given that the game has awesome music. The fact that recognizable music from the series only plays when you defeat a boss is irrelevant; Konami brought its A-game to this music track, and Konami's 8-bit soundtracks are the stuff of legend. Even the level five overworld music, which cribs shamelessly from The Beatles' Come Together, develops into a great funk rock piece. 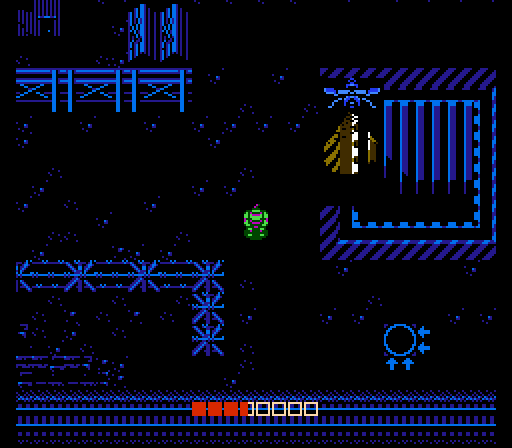 Donatello got to be a joker he just do what he please.

We will also take as given that the game is as faithful to its franchise as any licensed games of the time. The major characters are all present -- each Turtle with his signature weapon, Splinter, Shredder, April O'Neil, Rocksteady, Bebop, even the Turtle van -- as well as familiar enemies and loctions. Mousers and Foot soldiers fill the streets and sewers of New York (and the Technodrome)...along with some less-familiar faces. (Do you remember flaming men or Darth Vader-looking robots on the TV show? 'Cause I don't.) You win some, you lose some.

One more for the "lose" column: The Turtles license is presumably the reason this Virtual Console game costs 100 more points than any other NES game. 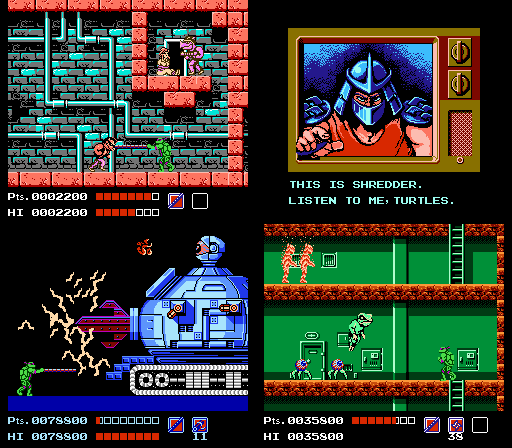 Rocksteady, Bebop, Shredder, and the technodrome I know.
Flaming guy, giant frog, and eyeball spider? Not so much.

We will posit that the game has average graphics for its time. Some sprites are detailed, some not. The Turtles themselves don't look so great in motion, and some enemies (like the aforementioned men on fire) are downright lazy in execution. Despite the uneven sprite quality, the backgrounds are detailed despite their muted color palette, and cutscenes and character portraits look great.

We will further stipulate that the gameplay features a handful of interesting ideas, even if their implementation was flawed. For instance, you can switch freely between each Turtle at any time, and each Turtle's weapon functions differently. Theoretically, this should mean the game is a balancing act of choosing the best Turtle for the current situation, but in practice only Leonardo and Donatello are actually worth using. (A forgivable flaw seeing as they're the two best Turtles anyway.)

TMNT features a variety of sub-weapons to acquire, all of which are useful. The downside to these is picking one replaces your previous weapon and automatically equips it. This means that in the space of about one second, you can kill an enemy while moving, inadvertantly walk over the new subweapon it drops. It then replaces the weapon you had already chosen as ideal for the current situation, leaving you to attack the next enemy with your new, crappier sub-weapon rather than the one you want.

Most of the levels involve considerable exploration. Buildings and sewers often connect to one another, forcing you to navigate the area to find where you need to go next. Sometimes you'll need items -- such as ropes to cross rooftops or missiles to blow up barriers -- in order to proceed to new areas. Your ultimate destination for each stage can be opaque, and since enemies reset in buildings every time you leave a room, the back-and-forth exploration soon grows tedious. 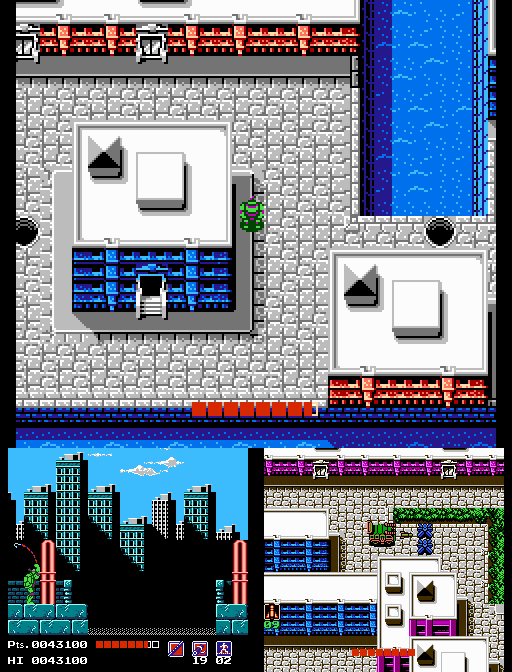 Top: One of these entrances leads to the final boss.
Below: Metroidvania elements in TMNT.

Based on the above axioms alone, TMNT likely comes across as yet another mediocre licensed title -- which isn't entirely unfair. But simply left to that, the game wouldn't be worth a look at all, except perhaps to those with nostalgic Turtle memories. Still, there's one other audience who might appreciate the Turtles' first NES outing: Those who love a challenge.

The challenge here is twofold. First, mastering the iffy controls; secondly, dealing with the game's ridiculously strong enemies. In other words, you need accept the control scheme as part of the challenge.

Jumps, for instance, have a classic "floaty" feeling. It's easy to get great height on them, but once airborne you have little horizontal control. This is a problem when battling indoors as hitting the ceiling will cause you to fall or take damage (or both), so you need to tap the jump button precisely. Worse is when you try to land on a small platform -- without the perfect amount of momentum, you'll sail right on past without much hope of correcting your trajectory. Even if do land, ground control is so slippery you may fall right off anyway. 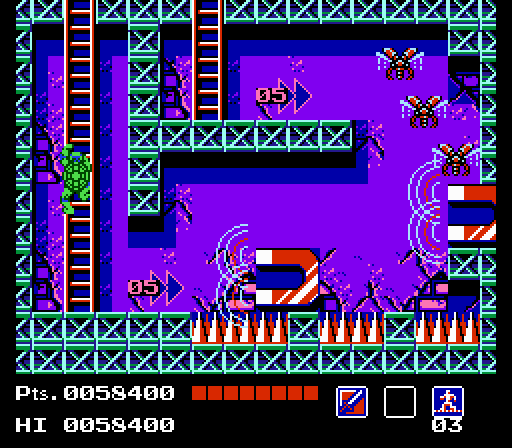 Besides accepting poor control as a deliberate element of the game's challenge, you still have to content with brutal enemies. The first level alone features regular enemies that can absorb two hits from Donatello, the strongest Turtle. By the last level, many enemies require eight hits to kill -- topped off by the fact that they're shooting back and moving around. Oh, and reappearing when you scroll them back onto the screen. A healthy stock of the scroll sub-weapon can defeat them in half the time, but only if you don't lose your entire stockpile by accidentally picking up a different sub-weapon. Even then, you'll inevitably take damage from enemies due to the difficult control scheme.

Still up to the challenge? Keep in mind the game only gives you two continues, so you'd better enjoy replaying all the earlier levels.

TMNT taught me that robotic kangaroos are four times as tough as Foot soldiers.

So, in order to recommend downloading Teenage Mutant Ninja Turtles for Virtual Console, we'd have to assume the buyer finds pleasure in overcoming a poor control scheme and otherwise extreme and unnecessary difficulty in order to extract entertainment from an old, flawed game about a cartoon. This describes me to a T, but I can probably count my peers on a single hand.

And if you're not one of us? For the love of god, don't buy this game.