Two generation-defining series make their way onto home video today. I was born too late for My So-Called Life to define my generation, but I was still aware of its existence, and it gave me an addictive preview of what I might be in for when I got a little older. Similarly, Zach Braff is often given credit (or, alternately, blamed) for being the voice of a generation. Though he's reviled by many, I happen to like him and his point-of-view, but even so this season of Scrubs is for completists only. Meanwhile, Angel gets every episode bundled together. If you haven't pick them up individually, now's your chance to add some of Joss Whedon's finest work to your TV-on-DVD library. Twin Peaks finally arrives on DVD in its entirety after years of legal bickering over the rights prevented all but the first season from being released. Also, some other stuff is on the way out, like CSI. Blech. You'll have to sort through those on your own. 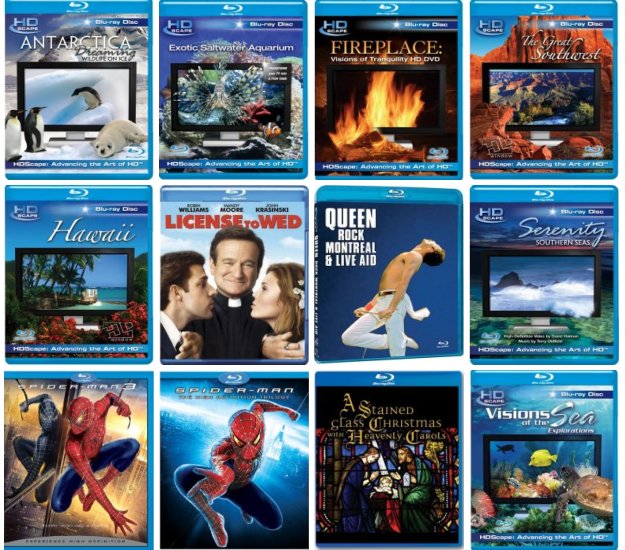 This is the last week I'll be including music videos and pointless nature/travelogue/fishtank demonstration discs in my column. I don't know what the home media term for shovelware is, but this crap is only released so people buying new HD-ready sets and who have more money than sense will buy 'em to show off their systems. Get the Spider-man collection instead, which will let you show off all your resolutions and pixels and sound channels and such with much more interesting content. Speaking of Spider-man, if you're looking to get into Blu-ray soon, Sony is going to bundle Spider-man 3 on Blu-ray with the 40GB model of their PlayStation 3. Granted, this version of the PS3 loses compatibility with PlayStation 2 software, but at $399 in the U.S. it becomes one of the most inexpensive Blu-ray machines money can buy -- and one that will let you play Metal Gear Solid 4, to boot.

On the other side of the battlefield, HD-DVD has a much cleaner release list this week. Not pictured is the live Queen video, which is also on Blu-ray. Oh, and you can't get the Spider-man flicks on HD-DVD, because it's a Sony property, and Sony is the evil mind behind Blu-ray. Aren't format wars great? [No, and they make me hate everyone involved. -- Editor] 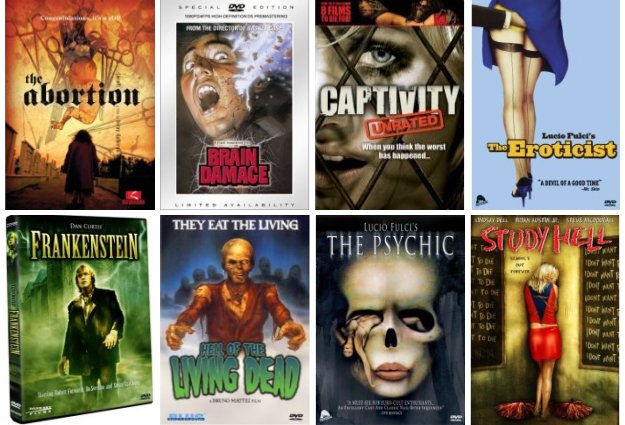 The horror releases have slowed to a trickle now that the big day is finally here! Thank god. The Abortion is exactly what you expect it to be based on the cover: A horror film about a woman haunted the ghost of her aborted fetus, a festive treat for the Roe-V-Wade haters in the audience. It's reportedly the best horror film to ever come from Turkey, but after Dumplings I don't think I can ever watch another horror film with abortion as a central theme. (Uh, as a side note: Do not watch the Asian horror film Dumplings unless you have a really strong stomach).

Brain Damage is typical '80s cheese. "From the director of Basket-Case" should tell you whether or not it's up your alley.

The Eroticist, also know as The Senator Likes Women might not technically be horror (it's more like sexploitation), but I'm including it here anyway because it's by Lucio Fulci. If you don't know who that is and you like horror as a genre, immediately add The Beyond to your Netflix queue. You won't be disappointed! Fulci's The Psychic is also out today.

Proving that horror on DVD is still a vibrant place for puns (I can hear my editor chuckling as I'm writing this) we get Study Hell. Get it?

What movie are you watching this Halloween? If you're going to a fancy party or something, which one would you watch, if you weren't too busy being Mr. Big Shot Society Guy? Let us know in the official thread!

Prepared with the assistance of The Digital Bits, a wonderfully comprehensive home media site, and cover art courtesy of Amazon, where you can purchase any of these titles. Rent all of the movies covered in the column online at Netflix. We recommend waiting until the format war is over before investing in an HD player, but if you have to do it right away our money is on Blu-ray. Be sure to PM the author via the forums if you have any suggestions for the column. You were doomed as soon as you lost the ability to love. Thanks for reading!