You know what's a good way to impress people? Make sure they have low expectations.

Actually, perhaps that's putting it too cynically. How about this: People like it when given more than they're promised. Buy a luxury car and every tiny hiccup is a personal affront. Buy a $500 junker whose ignition you turn with a pair of scissors, and you feel good about keeping speed in traffic.

The same applies to media. Cinema's most notorious train wrecks started out as its most ambitious projects. Cleopatra and Waterworld were the most expensive productions of their time. The former nearly bankrupted Fox, and the latter was, well, Waterworld. Since this is a gaming site, I'm obligated to mention how it's impossible to discuss Metal Gear Solid 2 without reference to its pre-release hype and thematic pretensions. 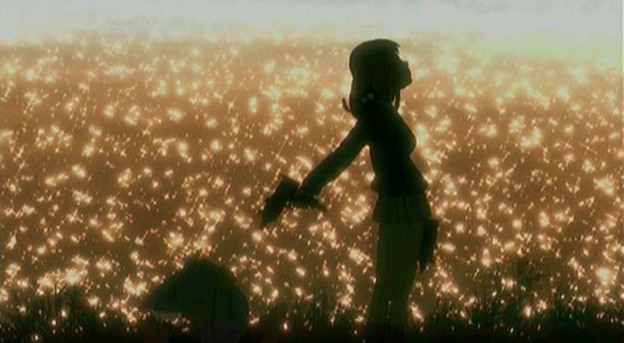 And that's what it all comes down to basically: Pretension. For whatever reason, we just can't feel sympathetic to those who reach for the stars and fail. Producing a bad work of art is forgivable, but produce something underwhelming that aspires to greatness and you've made yourself an easy target.

The creators of FLCL understand this. Or at least I hope they do, or else my thesis is shot. Gainax and Production I.G tried their hand at the profound with Neon Genesis Evangelion, the most pretentious anime ever by some accounts. With the follow-up, they seemed to tell their audience "Hey, how about something a little more light-hearted, eh? Robot fights, wackiness, lo-fi rock, that sort of thing. It'll be fun!"

And they were right. It was a lot of fun. The fight sequences were action-packed and succinct, never drawing things out simply to pad the running time. The series' devotion to surreality is endearing, never content with settling on a mundane staging when a more inventive (or at least, a more quirky) approach is available. The soundtrack's consistent use of The Pillows adds a level of stylistic consistency and wonderfully complements the OVA's rock 'n roll aesthetic. Plus, the The Pillows are awesome.

So yeah, mission accomplished, good game, see you next time. FLCL would have been a perfectly competent show if it had left it at that. Nothing terribly special, but not a bad way to spend two and a half hours. What makes the series really worthwhile is what lies just under the surface. There, lurking just beneath (someone more skeptical might say "obfuscated by") the hyperactive freneticness, was the show's tangle of themes. 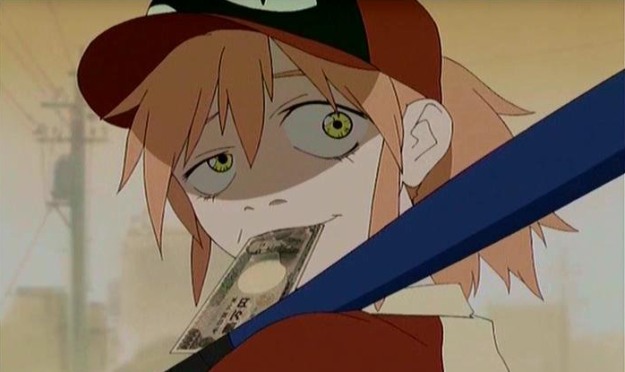 Not terribly grandiose themes, mind you. It's not about religion, or good and evil, or the corrupting influence of power, or what it means to be human, or any of those other high-minded themes tackled by those looking to pen their magnum opus. The creators actually take the time to poke fun at Evangelion and its supposedly deep themes as a character rattles off a passage of his Eva book.

FLCL focuses on simple themes. Sexual awakening, power structures in relationships, lies, and maturity are all tackled in turn. More than that, they're tackled throughly. By focusing on a handful of topics that the creators actually have something to say about, the series avoids feeling bloated and overwrought. The only time FLCL sort of reaches beyond its grasp is the the whole clothes iron/brain wrinkles metaphor. But perhaps that was just to offer a unique explanation behind a standard "the world is in peril" climax.

The fact that the one element that gets away from them stands out shows how, for a show that features an alien girl in a Playboy bunny outfit fighting giant robots riding on a flying guitar, FLCL shows a certain amount of restraint. The decision to stick with a six-episode OAV instead of a full series keeps the series reined in from wandering down unfruitful tangents and befits is straightforward themes. Not to mention the way it prevents the series from running short on funds and resorting to tons of animation cheats and extended internal soliloquies by the end. The animation in general is stellar throughout, competent in any of the myriad of styles it employs throughout the show and infused with a real, concrete sense of place.

The show also refrains from throwing out obtuse symbols everywhere for the hell of it. The use of subjects and symbols shows a great economy of storytelling as the symbols employed also double as running jokes. The preoccupation with spicy foods and Amarao's eyebrows are both symbols of affected attempts at maturity, and both serve as the basis for the some of the show's better gags. Of course, it's easier for the symbolic to count as jokes when the topic at hand is sex, but that's sort of the point. The subjects tackled perfectly suit the show's more superficial comedic/action exterior, but still present an actual underlying messages. 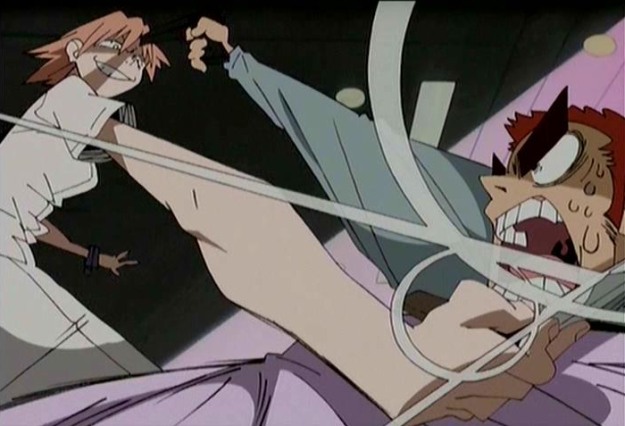 I specifically requested no trimming the sideburns!

It's actually the ultimate expression of artist restraint. We all might want to produce something terribly meaningful and profound, but sometimes it's better to work smaller and make sure what you're producing actually has meaning. It's not so much setting your sights low as being honest.

And now that I've sufficiently raised your expectations when watching the show, you're all ready to be disappointed. Oops.