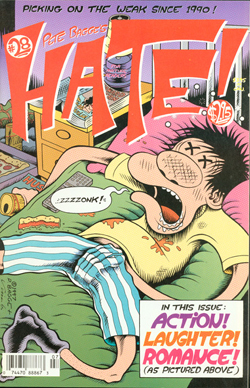 The term "Mary Sue" is fairly well-known to the Internet-savvy and those whose literary tastes fall within a certain gamut of nerdiness; while quite a great deal of non-credible research has been done on the subject, most people whose preferred book covers do not depict robots, dragons, or cartoon characters are unaware of this literary pejorative. As a universal rule-of-thumb, any terminology with origins in Star Trek fan fiction should best be forgotten -- but the Mary Sue is a unique case, one that can teach us some important lessons on how to not write protagonists.

For those who happen to be in that blissful state of not knowing what a Mary Sue is, this term refers to a too-perfect main character of a fictional work, usually operating as the author's avatar, who effortlessly solves every problem and sometimes has more sex than is appropriate when operating outside the auspices of pornography. While the term has many connotations and implications, Mary Sues generally exist to serve a writer's inflated ego rather than the reader's enjoyment.

(Sorry about shattering your bliss.)

Hate could have easily carried the curse of the Mary Sue, especially considering the book's role as a pseudo-biography for its writer and artist; after all, comics -- especially web comics -- tend to be the most flagrant Mary Sue offenders. Hate, however, takes a step into the world of the Anti-Sue; main character Buddy Bradley is a shiftless slacker with a distinct lack of redeeming qualities to compensate for how frustrating he can be. Buddy is slightly racist, slightly sexist, slightly alcoholic, and excels only at making the worst possible decisions in life. It would be easy for Bagge to vilify Buddy, but instead the cartoonist's alter ego is rather sympathetic. He's very real, very flawed, and ultimately powerless in the face of being peed on so many times by the universe. Reading Hate is an exercise in vicariously experiencing the joy of minor achievements and the ambivalent grumbling of loserdom -- and really, isn't that what life's all about? 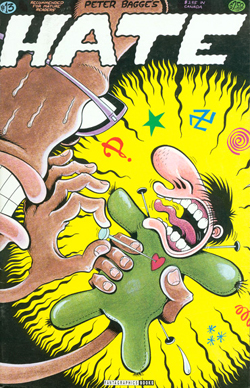 The biography of Buddy Bradley doesn't start with Hate; Peter Bagge began using this character and the rest of his family in a series appropriately titled "The Bradleys," published in a comic called Neat Stuff and later collected in its very own book. Simpsons creator Matt Groening didn't necessarily rip off The Bradleys to create his very profitable animated series, but Bagge's cartoon deconstruction of the American family predates The Simpsons by at least four years, and was published at a time when Groening himself was an alternative cartoonist. If that isn't enough evidence of Peter Bagge's influence on that big, yellow mass of American culture known as The Simpsons, Matt Groening is also blurbed on the cover of The Bradleys. So there.

The meat of Buddy's life in comics, however, exists squarely in the 1990s, when Bagge was at his most productive. That being said, Hate reads like a time capsule from the '90s; not so much in the sense of "Oh my God I can't believe we used to dress like that," but in a way that reflects the culture of a specific generation during a particular period of time. Rather than delivering the quick-and-easy parodies of Generation X so popular in the 1990s, Hate portrays this age group without idealizing or demonizing them. Bagge is no X'er -- he was born in 1957 -- but his writing of a slightly-younger generation really captures the first time it was acceptable to be an aimless drifter since the age of the boxcar.

Being that Bagge's art style is so distinctively cartoony it can be seen from space, it'd be easy to immediately label Hate as a comedy. And when Hate is funny, it's really funny; Bagge's mix of broad, wobbly-armed slapstick and dark, cutting humor make Hate -- the first half, anyway -- a damned funny comic. Hate, however, is not a series of setups, punch lines, and masturbatory dialogue all designed to show you how "clever" the writer is; Bagge finds humor where it exists, but is really more interested in telling stories realistically than he is in presenting a bunch of well-groomed Gen-X'ers with one eyebrow raised and something immediately clever to say, as in some other productions of the era. This is especially true in the second half of the series, which recounts Buddy's life with his parents in New Jersey after his exile and freedom in Seattle. There's not much joy to be found here, yet even with Bagge milking Buddy Bradley's misery for all it's worth, he can still find humor in situations where laughter is the only appropriate reaction to being bludgeoned with adversity. 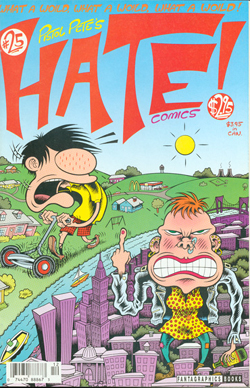 Buddy may be the most pathetic character in Hate, but, thanks to the almighty power of relativism, he certainly isn't the worst. While he is an uncouth, ignorant man-child, he brings a certain kind of charm to that period of extended adolescence known as the twenties, and actually comes off as one of the most "normal" of Hate's cast. Hate is by no means a comic for escapists; each and every character is terrible in their own unique way, and while they may change realistically throughout Hate's thirty issues, their personal development is a slow process and not always in the right direction.

Buddy's attachment to Lisa, his legitimately crazy girlfriend, is possibly the most distressing part of Bagge's story; while nothing good can come of their pairing, Buddy and Lisa -- like anyone blinded by love -- fail to see how destructive they are to each other, nor realize that they stay together out of convenience more than anything else. Buddy's failure to remove himself from the Lisa situation makes Hate end on a somewhat hopeful note for the characters, but a bleak note for the readers. Still, this type of codependent relationship is hardly uncommon, and Bagge expertly details the horror, bit-by-bit.

Hate is a difficult work, especially for readers unaccustomed to the (figurative) ugliness and heartless realism that writers like Bagge are capable of. Buddy Bradley's story thoroughly documents the slow, painful transition to adulthood and the horrors therein; Hate's world is one of personal responsibilities, missed chances, and broken dreams. What may be most remarkable about the book, though, is Bagge's even-handed treatment of Generation X. The first half of Hate romanticizes the slacker lifestyle in its own special way; despite the problems Buddy faces, he's a free spirit in the city full of opportunities known as Seattle. At the midway point of Hate, however, the realism of slacker life kicks in as Buddy is forced to move back home and seriously think about what the hell he's going to do with his life.

Some of us in our twenties would prefer not to be faced with such issues; but those who are willing to face reality can read Hate and appreciate what may be the most telling representation of those tarnished-yet-golden ten years of our lives known as the twenties. With Hate, Peter Bagge cuts through idealism and presents a character who, like us, doesn't always make the right decisions. If you take anything away from Hate, it should be Bagge's perfect portrayal of that horror which affects us all: an ever-approaching adulthood.