Now available in print through Blurb.com. Choose from a somewhat reasonably priced paperback edition or a bank-breaking hardback edition that justifies its expense by pulling double-duty as a blunt weapon capable of stunning or maiming a man.

As an experiment, these books are also available in Blurb's brand new color format. This book was laid out with color images but isn't optimized for a full-color format, and its length means these color editions are incredibly expensive. I don't recommend buying the color versions! But they're here if you want them, both the painfully pricey paperback and the heart-stoppingly high-cost hardback. Seriously, though -- caveat emptor.

As with all issues of GameSpite Quarterly, this book is published on demand and will never go out of print. You can purchase this and all other GameSpite volumes at Blurb's GameSpite store. Enjoy! 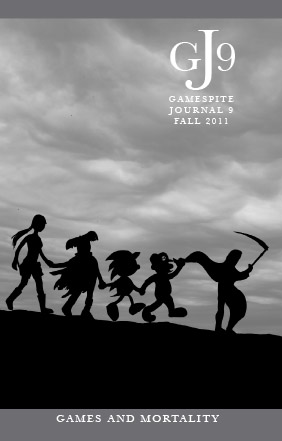 Like the eponymous lector of T.S. Eliott's "The Love Song of J. Alfred Prufrock," I grow old. I was never much for beach walks with my pantlegs rolled up, though, and peaches rank among my least favorite fruit. That wraps up the existential dilemmas, anyway. Even so, I've found myself thinking about my inevitable aging of late. My face is lined, I often wear ties, people don't card me when I buy wine; it's all really quite tragic.

And since I work with video games day in and day out, these grim musings sometimes overlap with thoughts on games and game design, which is what led to the opening volley of articles in this latest edition of GameSpite Journal; the question of where games overlap with mortality formed an unintended but unquestionable pattern in my writing. I'm not the only one, though, which makes for a somewhat bleak lead-in this time around.

Don't worry, though -- death is but the beginning of GSJ9, and things grow rapidly more cheerful from there. If I could apply that power to life, I'd either be rich, or Mork from Ork.

Please note that all content is identical in both paperback and hardcover editions.

Justin Hoeger (Big Daddy Dearest) wants to take the ears off, but he can't.

Marc Host's ('Nobi Nobi Boy) sequel was so forgettable that it doesn't even warrant a mention.

Jake Alley (Stressing Out the O.C.D. Kids, etc.) drops an item you need to unlock the best ending if defeated within 20 turns, but only 2% of the time.

put Ben Elgin (Stacked in Your Favor) into line 12 of Bylines. put Bylines into field MainText of card (number of cards) - 1.

Aaron Littleton (Romance of the Three Kingdoms VIII) keeps himself going by imagining a juicy plum.

Andrew Bentley (Tales of Legendia) is the King of Textbox Mountain.

Jeremy Signor (Shattered Expectations, etc.) needs to fill his waterskin so he won't die of thirst.

Jeremy Parish (Ultimate Perspective, etc.) looked into the death star. Then he died.

Justin Fairchild (Lessons in Level Design) was born that way.

Alex Reo (How I Fell In and Out of Love with Rock Band, etc.) can make the jump on Koopa Troopa Beach without using a mushroom.

All magazine text is Â© its respective author.

GameSpite Journal 9 Copyright Indicia: The images reproduced in this volume are printed under the banner of fair use as supplemental visuals to support critical writing. Our words belong to us, but we make no claim to the works and images in question. They belong to.....

As usual, most images in this volume have been sourced from the following sites, with explicit permission of the site owners and curators: Hardcore Gaming 101 (http://hg101.kontek.net); The Video Game Musuem (http://www.vgmuseum.com); and the Letï¿½s Play Archive (http://www.lparchive.org). Cover image includes photography sourced from Wikipedia and used under the Creative Commons License (photo by Flickr user mistagregory).