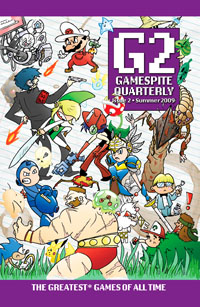 Buy this issue in a handy print version for your bathroom reading convenience! Also available in a hardcover deluxe edition featuring 37 pages of extra content.

Greetings, humans! Welcome to the second issue of GameSpite Quarterly. With the publication of this volume -- almost precisely three months to the day after the first issue -- I no longer feel so nervous about having dubbed this project "quarterly." Of course, the real test is whether we can handle two more of these in the same rhythmic time frame, but we're halfway there. And that is pretty great.

This issue is slightly different from the last, which I suspect will be a running theme from one quarter to the next for as long as this publication survives. Since we don't really have a charter outside of "write interesting things about videogames," and we have no obligations to advertisers, sponsors or publishers, we're free to do as we see fit. In this case, that means this entire volume is dedicated to expanding on a poll conducted a while back on GameSpite's forum, Talking Time. Without really explaining why, I asked forumgoers to list their five favorite games ever. Then, I compiled the results into a ranked list, and the site's editorial contributors divvied up the topics.

The outcome is this book: A wholly subjective ranking of the "greatest" games ever. It is in no way an objective, definitive, or even necessarily reasonable list. The top results are overwhelmingly clustered around the Super NES, which is probably wholly predictable given the age of most Talking Time users (the 16-bit era defined their early adolescence and left an impression on their soft, clay-like minds) and the fact that the forum grew up around one guy's personal blog. It stands to reason the community's tastes wouldn't be too terribly removed from my own, right?

Yet even amidst that unintentional conformity, there's remarkable variety. Our collective game selections span almost 25 years of history, from Super Mario Bros. to Rock Band 2?. Nearly every major platform is represented, including Dreamcast, Amiga, Game Boy, and lots and lots of PC games. A wide span of genres is covered, too; just about everything but sports games.

Most importantly of all, though, the topics at hand have inspired some of the absolute best writing about games I've ever read. But there's no sense in my hyping up this magazine; if you're reading this, you've already acquired a copy and my hyperbole is pointless. Rather than sell you on the quality of a book you already own, I'll simply let you get on with reading about the greatest[*] games of all time.

A Few of Our Favorite Games: GameSpite's cast and crew ponder some of the games that have made lasting impressions on their gentle souls.

39. The Legend of Zelda | Jeremy Parish

35. Shadow of the Colossus | Ben Elgin

16. The Legend of Zelda: Ocarina of Time | Johnny Driggs

5. The Legend of Zelda: A Link to the Past | Andy Keener

All text and original artwork ©2009 its respective author. Screenshots ©1985-2009 the original work's respective publisher. Copyrighted images used under the terms of fair use. Cover illustration by Philip Armstrong. Editing, layouts and design by Jeremy Parish. Copy editing thanks to John Roach.

[*]"Greatest" in this case meaning "personal favorites according to a poll conducted on GameSpite's forums."